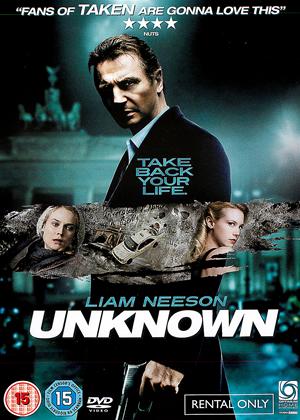 Synopsis:
Dr. Martin Harris (Liam Neeson) awakes in a Berlin hospital with severe head injuries and very little knowledge as to how he got there. The doctors inform him that he has been in a coma for four days after surviving a near fatal car crash. Attempting to piece together the incidents leading up to the accident, he discovers that his wife (January Jones) no longer recognizes him and another man has taken his identity. Now the only thing standing in the way of him and the killed. It's time for Dr. Harris to face his identity, his sanity and take back his life…by force.
Actors:
Liam Neeson, Diane Kruger, January Jones, Aidan Quinn, Bruno Ganz, Frank Langella, Sebastian Koch, Olivier Schneider, Stipe Erceg, Rainer Bock, Mido Hamada, Clint Dyer, Karl Markovics, Eva Löbau, Helen Wiebensohn, Merle Wiebensohn, Adnan Maral, Torsten Michaelis, Rainer Sellien, Petra Hartung
Directors:
Jaume Collet-Serra
Producers:
Leonard Goldberg, Andrew Rona, Joel Silver
Writers:
Oliver Butcher, Stephen Cornwell, Didier Van Cauwelaert
Studio:
Optimum
Genres:
Thrillers

I didnt see the twist in this film, so if you like a twist this is for you.interesting storyline too

Liam Neeson has a distinguished acting career, probably peaking with his leading role in Steven Spielberg's 'Schindler's List' in 1993. But from 2008 onwards he has re-invented himself as a (somewhat elderly) all action hero, first with his role in 'Taken' (and a couple of sequels), this film - 'Unknown', 'The Grey', 'Non-Stop', and 'A Walk Among the Tombstones'. (I might have missed one or two - and I'm not counting the 'Batman etc' films).

I enjoyed 'Taken' but frankly it was a bit formulaic, a bit condescending to the world outside the good ol' USA - apparently Europe is a dangerous place, a hotbed of the white slave trade...

Now here he is in 'Unknown' and it's a bit more of the same, but with a twist (which is easily guessed). He plays a US scientist attending a conference in Berlin with his wife. He is involved in a car accident and loses his memory, finds that another man has taken his place and his wife no longer recognises him. What's going on? Is he going mad? His search for his true identity takes up the rest of the film.

Given that his role is 'elderly action hero' you can expect fisticuffs, car chases and violence. It's quite entertaining, but Mr Neeson was 58 when this was made, some 26 years older than January Jones who plays his wife. I find this kind of thing at best inappropriate, much like Clint Eastwood used to cast himself with a far-too-young family before he got used to playing grumpy, grizzled old men. But Mr Neeson hasn't yet reached this stage, although his hair dye is showing...

I did enjoy it, but it is formulaic stuff again so I'll give it 3/5 stars.

Dr. Martin Harris (Liam Neeson) is in Berlin with his wife Liz (January Jones) for a biotech conference. When he realizes that he’s left his briefcase at the airport, he hails a cab to retrieve it – only to skid off a bridge and into the river! A few days later, Martin awakes from a coma and returns to meet his wife at the conference.

But something’s wrong: His wife doesn’t recognize him and beside her is another man saying he is Dr. Martin Harris (Aidan Quinn). Is Martin really who he says he is? If so, why has someone taken over his life? What is going on?

Such are the questions Liam Neeson has to answer in the action-thriller ‘Unknown’ directed by Spaniard Jaume Collet-Serra. In it, Neeson investigates the identity theft that’s happened to him and pieces together what he knows from what’s left of his memory. Joining him are a cab driver, Gina (Diane Kruger), a Bosnian immigrant and a retired Stasi officer Jurgen. Together in paranoia, fisticuffs, firing guns, and car chases across Germany, Neeson and company discern that they’re up against forces that don’t want to be messed with.

‘Unknown’ has been described as a cross between the ‘Bourne’ films with Liam Neeson’s 2009 hit ‘Taken’ and a dash of Alfred Hitchcock noir. Berlin gets its Hollywood treatment and its architecture, gloom, and cold are highlighted with great care. You know there’s something hot brewing under that icy exterior. Neeson is in top form, still regal even when confused and conflicted.

His fighting skills make him the most unexpected action hero, yes, but he can definitely pack a wallop. His support from German actors Diane Kruger and Bruno Ganz are well-played; their unlikely trio/alliance is very convincing. The action sequences are competently shot and the plot is full of surprises.

The film ‘Unknown ‘may seem like a mashup of most action-thrillers these days, but it borrows from the right films and improves on its weaknesses. Who knew amnesia could be so thrilling?