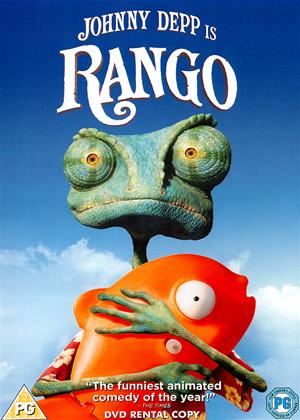 I made the mistake of starting to watch this with my 5 year old son, and a moment 5 minutes in made him run away screaming. However, I stuck with it, and enjoyed it. It was thoughtful, well constructed take on a very tired idea. I suppose I was hoping for more Hunter to come out in the story but it was worth the time, and I would recommend it.

Johnny Depp and director Gore Verbinski re-team yet again after the ‘Pirates of the Caribbean’ movies – this time in CGI-animated feature ‘Rango’. This is not Depp’s first animated role (it was Tim Burton’s ‘Corpse Bride’) but this is Verbinski’s first foray in animation ever. And if their ‘Pirates’ movies are any indication of how broad and all-encompassing their humor is, think again – ‘Rango’ is actually an adult cartoon and kids may not enjoy it the way most adults would.

‘Rango’ is a cartoon spaghetti Western littered with stylized reptiles. Johnny Depp voices a bug-eyed chameleon in Hunter S. Thompson wardrobe a la ‘Fear and Loathing in Las Vegas’. He is not exactly Clint Eastwood although he aspires to be. Having escaped from his aquarium, the lizard lands in a desert city called Dirt where hooligans run the town and its lowly citizens are in desperate need of a champion.

For Rango, he is just what the town’s looking for. Unfortunately, Rango is not much of a hero. He’s all huff and puff and for the most part, the people of Dirt believe him – until bad guys come a-walkin’. Now it’s up to Rango to do his part – tell the truth that he’s just an impostor or wing it as its defender. Either way, he’s in deep trouble.

The animation for ‘Rango’ was rendered in ‘emotion capture’. Johnny Depp and voice co-stars Alfred Molina, Isla Fisher, Bill Nighy, et al had to act together in order to be filmed and then become the basis for the cartoon. It even has award-winning cinematographer Roger Deakins as visual consultant.

Thanks to Industrial Light & Magic, ‘Rango’s vivid and imagined world of reptiles came to life in all its surreal-ity. Incidentally, it is ILM’s first ever animated feature-length film. But for all its first-time novelties, ‘Rango’ remains a mish-mashed project filled to the brim with concepts and ideas. You get a sense of excitement for trying new, from Gore Verbinski, Johnny Depp, the rest of the cast, and its entire production – in the end, it’s quite overwhelming. Still, you can’t knock them for trying.