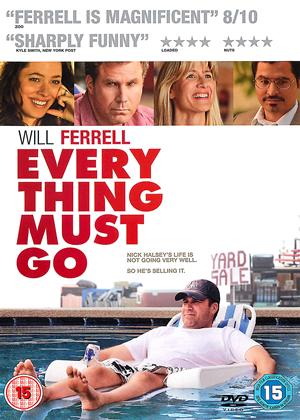 Synopsis:
Everything Must Go tells the story of Nick Porter (Will Ferrell) a man who sells "salesmanship" for a living, but the days of being on top of his game are long gone. After delivering an inspiring presentation to his sales staff, Nick is fired for falling off the wagon one last time. He returns home to discover his wife has left him, changed the locks on their suburban home and dumped all his possessions out on the front yard. Faced with his life imploding, Nick puts it all on the line, or more accurately, on the lawn.
Actors:
Will Ferrell, Rebecca Hall, Christopher Jordan Wallace, Michael Peña, Rosalie Michaels, Stephen Root, Laura Dern, Glenn Howerton, Argos MacCallum, Todd Bryant, Tyler Johnstone, Jason Spisak, Kyle Sharkey, Scott Takeda, Matthew Dearing, Leeann Dearing, Andy McDermott, Lance Gray, Narinder Singh, Chris Cook
Directors:
Dan Rush
Writers:
Dan Rush, Raymond Carver
Studio:
G2 Entertainment
Genres:
Comedy, Drama

Reviews (1) of Everything Must Go

Bored.... - Everything Must Go review by CP Customer

Not much happens in this film. I viewed for the whole 93mins and found myself almost asleep at the end. Not much of a story, not much of anything. OK acting throughout though. Avoid if you watch DVD's for entertainment purposes. Also avoid if you are depressed.

Everything Must Go review by Melissa Orcine - Cinema Paradiso

Nick Halsey (Will Ferrell) is a former drunk who just got fired from his job. To drown his sorrows, he buys lots of booze and heads home – only to find that his wife has left him, the locks have changed, their joint bank account is frozen, and all his possessions are strewn on their front lawn. What’s a lush-loser gut to do? Will Ferrell’s Nick decides to stay on his lawn, reclining on his La-Z-Boy chair, and boozing his way till he straightens out his life or gets evicted by the police.

Based on the short story ‘Why Don’t You Dance?’ by Raymond Carver, writer-director Dan Rush adapts it to the big screen as ‘Everything Must Go’, a dramedy where a drunk realizes that all the possessions he owns are the only company willing to stay and put up with him. This is a nice effort for Rush and especially for Will Ferrell, who has made a name for bungling idiots and lovable misogynistic leading men. It’s no surprise that Ferrell will dip his hand in drama; he did downplay his antics in ‘Stranger Than Fiction’, but as the case may be with comedians, it’s difficult to take them seriously when they act serious. Ferrell is a good actor, he can do both comedy and drama, but ‘Everything Must Go’ is not dramatic enough for his talents. Here’s to wishing him a better dramatic role next.

‘Everything Must Go’ however is charming. The people who show up at Nick’s front lawn are funny, weird, and at times caring. Nick’s former AA sponsor, a police officer, Frank (Michael Peña) wants him to get his act together or else he’ll book him. The pregnant neighbor Samantha (Rebecca Hall) is annoyed by Nick at first but soon finds someone to talk to as her husband is stationed far away.

Nick also befriends a bike-riding chubby kid named Kenny (Christopher Jordan Wallace) and in turn becomes his sales assistant, dispatching his wares on the lawn. With much tragedy comes a silver lining and ‘Everything Must Go’ wishes it to be true.