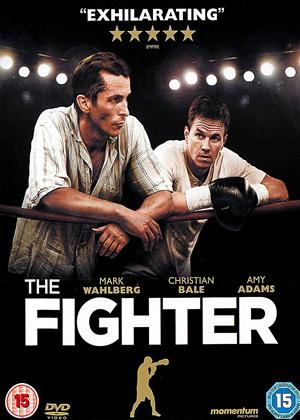 Reviews (3) of The Fighter

Very average - The Fighter review by Tim from London

Think about the great boxing films - Raging Bull, When We Were Kings, Body and Soul and On the Waterfront (just about a boxing film). Well this film just doesn't cut it in comparison. A slightly dull and straightforward film about a boxer overcoming adversity which doesn't even have melodramatic feel good factor of a Rocky film. The boxing scenes are unconvincing and consist merely of Mark Wahlberg getting hit a lot and then dong his rope a dope trick. I found Christian Bale to be highly irritating and histrionic and his performance should have been reined in by the director. Just about watchable is the best I can say.

Below average - The Fighter review by JD

I completely agree with the sentiment of the review entitled very average but think too many stars were awarded. I thought Raging Bull was too raw but at least it was passionate. Rocky was too formulaic but at least it was exciting. This is dull and dreary.

A great film about a working class dysfunctional family and the two boxing brothers from it. Wahlberg is the current boxer, not really being well managed by his mother and older brother trainer. Fed up of being a journeyman fighter he is encouraged by his new girlfriend ( a brilliant Amy Adams as a tough talking barmaid, with a good heart underneath) to break from his domineering mother and his permanently off his face crack head brother. Bale won an Oscar for his portrayal of Dicky, and is superb as the older retired boxer who once fought Sugar Ray, but is now a total mess spending most of his time in a crack house.

Mickey (Wahlberg in a fine role ) begins to make better progress without his family, but their influence is hard to shake off and Dicky fresh out of prison wants his trainer position back.

Great performances made this true story a great film for me.

The David O. Russell-directed film,‘The Fighter’, spotlights the hard-hitting and equally hard lives of half-brothers and boxers, Micky Ward (Mark Wahlberg) and Dicky Eklund (Christian Bale). Raised in downtrodden Lowell, Massachusetts, their ‘Pride of Lowell’ is Dicky, who shot to fame when he presumably knocked down Sugar Ray Leonard in a 1978 bout.

Most argue Leonard tripped but no matter, even when Dicky lost via unanimous decision, Dicky still rides on his fame/infamy. We see Dicky being followed by an HBO crew filming him – as he believes – as he makes his comeback to boxing. Dicky is also training his younger brother Micky, a welterweight boxer who is dubbed a ‘stepping stone’ – his opponents use him to move up the ranks.

Things aren’t getting any better, though.

I liken ‘The Fighter’ to the parable of ‘The Prodigal Son’ in the Bible. You have the problematic yet charismatic son Dicky, and the good, obedient son Micky. Nepotism runs deep in the family (and even in the Bible when you think about it) and it doesn’t help that their own mother Alice has a hard time disguising it. She knows Dicky’s her favorite, we know he’s her favorite, but she tries to deny it, oblivious to her favoritism.

Dicky is literally bad news (irresponsible and a crack addict at that), hurts his brother Micky’s chances at a respectable boxing career, and still, their mother Alice gives him concessions. When your family brings you down, what does Micky in the end choose – family or strategy?

‘The Fighter’ has the right amount of grit, realism, and drama that most boxing movies have a hard time to accomplish. Perfect casting, quiet moments combined with boxing action shot in low-res cameras, and a story showcasing underdogs – it does not pull any punches. And it’s a true story.