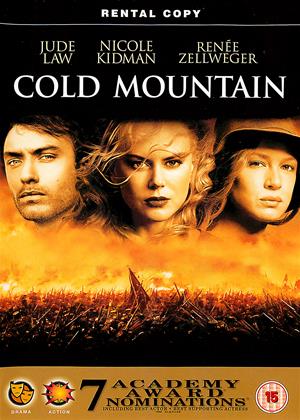 Based on the novel by Charles Frazier, Cold Mountain is a epic tale set in the final days of the American Civil War. Jude Law stars as Inman, a young soldier who despite an injury is struggling to make his way home to Cold Mountain where his beloved Ada (Nicole Kidman) awaits. In Inman's absence, Ada befriends Ruby (Renée Zellweger), who helps work her late father's farm. Meanwhile, on his journey home, Inman encounters many interesting people. All in all, 'Cold Mountain' is a well directed film with great characters, great actors, and a great story which has something to say about life.

I suspect that viewers who are not particularly fans of Nicole Kidman or Jude Law will approach this American Civil war drama cautiously, I certainly did.

Quite honestly had I realised that it was directed by Anthony Minghella (The English Patient) I might have dismissed it instantly so bored was I by that, 9 times Academy Award winning, abomination.

However, despite some minor complaints such as Minghella's perpetual habit of allowing his films to run overlong and the occasionally unnecessarily gory depiction of war, I was more than pleasantly surprised to find a warm heart at the centre of Cold Mountain.

Having been won over, I'm now more than prepared to see the merits of this film. Indeed whilst the love story between Kidman and Law struggles, the Odyssey style journey that Law finds himself on entertains.

In the lead roles Kidman and Law produce fine performances.

But it's the delightful supporting performances from Phillip Seymour Hoffman, Natalie Portman, Brendon Glesson, Giovanni Ribisi and Reneé Zellweger that audiences will find most appealing. In truth they each steal almost every scene that they appear in.

Cold Mountain is currently showing in cinemas nationwide, and although it's strange to watch a film where the subplot is the most entertaining element I nevertheless hope that you'll find it to be, much as I did, well worth the journey.