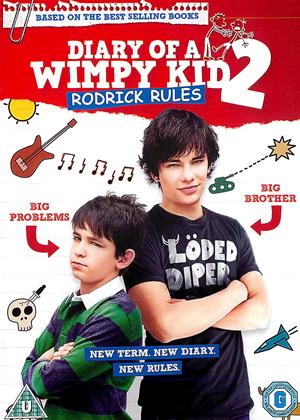 Rent other films like Diary of a Wimpy Kid 2: Rodrick Rules

Reviews of Diary of a Wimpy Kid 2: Rodrick Rules

Based again on another of Jeff Kinney’s popular young adult novels, ‘Diary of a Wimpy Kid: Rodrick Rules’ now has its lead wimpy kid Greg Heffley (Zachary Gordon) entering seventh grade. After surviving sixth grade, life in the junior high school fast lane will not get easier. Greg has also found himself falling head over heels with Holly (Peyton List) and he doesn’t know what to do (who does, anyway?)

Besides puberty, Greg has to deal with his lanky older brother Rodrick (Devon Bostick), who is relentless in taunting him. But Rodrick is family and Greg has no choice but to seek Rodrick’s advice when it comes to growing up. Of course, who better dispense sensible advice to an impressionable young kid than his hormonal and angsty older teen brother? Add to Greg’s stress is Rodrick’s plan to host an illicit party. As much as Greg wants to party like a rock star – Rodrick thinks he is one already since he has a ‘band’ – he’s not exactly fine with their parents finding out about it. What can a wimpy kid like Greg do?

The first salvo of ‘Diary of a Wimpy Kid’ was a surprise hit and for good measure – Greg’s trials and tribulations are totally relatable. Every one of us was a wimpy kid at one point of our lives. It also helps that the first movie was an inspiring and creative project, you can tell.

The books by Jeff Kinney aren’t exactly easy to adapt to the screen. There are many drawings in the novels and Zachary Gordon doesn’t look like the books’ titular character. But somehow it did wonders for its film treatment. For ‘Rodrick Rules’, having the focus turned to Greg’s older brother seems to be a welcome sight. However, the movie version is just not working. Not only is Rodrick shallow, annoying, and a bully, he’s not a son a mother (or brother) would want. You’re better off watching a TV movie. Actually, there are more meaty TV movies that tackle these issues better.

‘Rodrick Rules’ should have been the novel that producers have skipped.