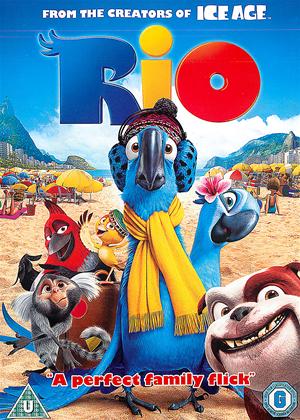 After seeing the main characters of this movie countless times in the irritating mobile phone advert many may be somewhat dubious about the quality of the film itself, but I can assure you, you will be pleasantly surprised.

The film tells the story of a rare exotic bird poached from its natural habitat in Brazil as a chick and then lost en route in America. He is rescued by a child who he then grows up with. The bird, Blu, is treated to a life of luxury – at least as far as he’s concerned – until one day a strange ornithologist appears and tells his owner, Linda, that he is the last known male of his kind and is desperately needed to save his species. So the trio travel to Rio de Janeiro, Brazil to meet Jewel the last known female.

However whilst in the Avery both Jewel and Blu are stolen and taken to a group of smugglers who see them as little more than monetary gains.

The majority of the film is taken up with Blu’s struggle to be reunited with Linda and the blossoming romance between him and Jewel.

In many ways this film is quite dark, dealing with issues of abandonment, threatened species and poaching, it takes a peek into the very real and very dangerous Brazilian underworld which for an adult viewer is quite disturbing.

Having said that there is no doubt that kids will love this film too, there are a few fun and loveable characters as well as your inevitable scary bad-guy that is very reminiscent of Walt Disney’s Scar in The Lion King. The few songs that litter the runtime along with the excellent jokes that cross the levels between child and adult make this a very watchable film, one of the best children’s films of the year.