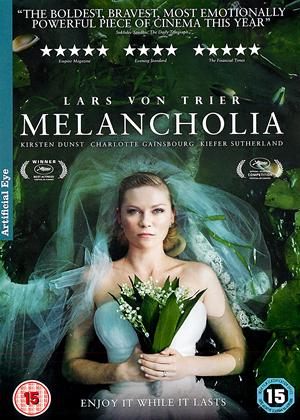 Haunting - Melancholia review by DO

I love Lars Von Triers films and this one is no exception. Loved the dual story and Kirsten Dunst's performance was incredibly real(I've been where she is in her mind). Great performances from the rest of the cast. This film especially the last half-hour, left me haunted for days afterwards. Highly recommend if you like thoughtful challenging cinema.

Previous reviews are accurate but boy is this depressing. Very well crafted in all aspects but for me little enjoyment gained.

Purposeless - Melancholia review by BE

Just watched. Rather weird. The whole family appeared to be unstable. I didn't enjoy it as much as was envisaged although Kirsten Dunst quietly took the lead role and gave an excellent performance. Charlotte Gainsbourg is an uncomplicated actor and always good to watch. I also liked Stellan Skarsgard and remembered him from 'River' the televised English detective series screened last year (2015). Watch out for other big names in supporting roles.

A film of two halves - Melancholia review by PW

The slow motion start was a wonderful pastiche. Then we got into a very uncomfortable family at an uncomfortable way. I wasn't sure how relevant this was to the second half. But any problems were resolved by the ending - no spoiler. Still thinking about what I would so in those circumstances

The first 10 minutes are some scenes in ultra-slow-mo, so slow that they appear to be stills at first. This drags a lot, but bear with it because then the film starts with a couple getting married. There is wealth and privilege in the family and there is also acrimonious divorce. This makes the wedding reception unpleasant to watch, but finally there is catastrophe. I don't know whether the film is just boring or whether with a little application I could have enjoyed it more.

Melancholia is a strange yet beautiful movie about the last few days of the world when a planet “Melancholia” from which the movie gets it’s name has appeared from behind the sun where it has been hidden for years and is now heading, inevitably, toward Earth where it promises complete destruction.

The movie opens with a prologue put to classical music an extreme slow motion images, which throws you into the slowly grievous story head first. Once your mind is fogged by the haunting and beautiful prologue the movie launches into the story proper; which is about two sisters, Justine and Claire – played by Kirsten Dunst and Charlotte Gainsbourg respectively – from a fragmented and dysfunctional family. Justine is just about to get married and on the surface she is your typical happy bride, however it becomes apparent quite quickly that Dunst is in fact a damaged young women, weighed down by emotional baggage and inexorably distant from the rest of the world. Whilst her sister Claire, is married (to Keifer Sutherland who puts in an excellent albeit clipped and staunch performance) and, again, despite leading a seemingly happy existence, is visibly struggling to keep things together.

Dunst, who I have always found often, blows hot and cold in her performances (dependant largely on the quality of the role) is excellent in Melancholia in an aching performance that is reminiscent of her performance in the Virgin Suicides all those years ago, whilst Gainsbourg is brilliant as ever.

The movie is a tragic yet impressive watch, which manipulates the quiet sense of pain and fear many feel at one time or another, and turns it into the story of lives unfulfilled and soon to be over.