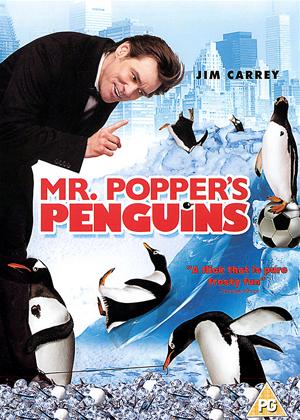 A little slow getting started, but one the penguins arrive the action is fast and extremely comical. Carey exploits his gurning talents to the full, and some surprisingly good and sensible insights.

Tom Popper Jr. (Jim Carrey) is a real estate magnate whose expertise is to eject you from your beloved land and sell it to the highest bidder. His heart is cold as ice but when his estranged father suddenly sends him a crate filled with six penguins, Tom is aghast. See, his father is a globe-trotting explorer who had all the adventures to be had, neglecting that he has a son waiting to have adventures with him. The penguins are his tokens of love – but what do you do with glacier-bound penguins in Manhattan? This is the movie ‘Mr. Popper’s Penguins’, loosely based on the 1938 classic novel of the same name.

Directed by Mark Waters, ‘Mr. Popper’s Penguins’ is a comedy where old-school and young Jim Carrey fans alike will enjoy – even with a thin main plot and flimsy subplots that don’t lead to a laugh-out-loud payoff. For a Jim Carrey movie, he is quite subdued compared to his all-out antics in his past endeavors. Though Carrey knows how to tweak his face and body to make funny, he doesn’t resort to Ace Ventura-ish over-the-top-ness. His supporting cast comprised of both real Gentoo and CGI penguins are fun-loving and cool-as-glaciers marvels.

‘Mr. Popper’s Penguins’ is also about divorce, joint-custody, and visitation rights personified. Tom Popper, although a workaholic and kind of a real estate meanie, is cordial to his ex-wife (Carla Gugino) and a doting dad to his two children. Even when Tom adapts the cute-as-buttons penguins, transforming his Manhattan apartment into an urban winter wonderland, he manages to provide warmth for everyone. Why Tom Popper’s father would gift him penguins to show his paternal love is an odd choice, but it’s the thought that counts, right?

Consider ‘Mr. Popper’s Penguins’ a ‘101 Dalmatians’ for the new generation. Expect kids to ask for penguins as pets this Christmas.