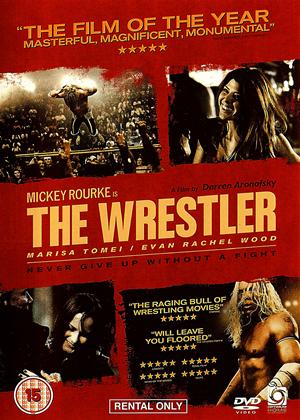 Synopsis:
Back in the late '80s, Randy "The Ram" Robinson (Mickey Rourke) was a headlining professional wrestler. Now, twenty years later, he ekes out a living performing for handfuls of diehard wrestling fans in high school gyms and community centers around New Jersey. Estranged from his daughter (Evan Rachel Wood) and unable to sustain any real relationships, Randy lives for the thrill of the show and the adoration of his fans. However, a heart attack forces him into retirement. As his sense of identity starts to slip away, he begins to evaluate the state of his life - trying to reconnect with his daughter, and striking up a romance with an aging stripper (Marisa Tomei).
Yet all this cannot compare to the allure of the ring and passion for his art, which threatens to pull Randy "The Ram" back in.
Actors:
Mickey Rourke, Marisa Tomei, Evan Rachel Wood, Mark Margolis, Todd Barry, Wass Stevens, Judah Friedlander, Ernest Miller, Dylan Keith Summers, Tommy Farra, Mike Miller, Marcia Jean Kurtz, John D'Leo, Ajay Naidu, Gregg Bello, Scott Siegel, Maurizio Ferrigno, Donnetta Lavinia Grays, Andrea Langi, Armin Amiri
Directors:
Darren Aronofsky
Writers:
Robert D. Siegel
Studio:
Optimum
Genres:
Drama, Sports & Sport Films
Awards:

Reviews (5) of The Wrestler

The Wrestler is by today’s standards a low budget American film that normally wouldn’t see the light of day at your local multiplex. Yet thanks to the towering performance by Mickey Rourke, even the major chains cannot resist showing what is a memorable film.

Rourke plays a wrestler, fallen on hard times and struggling to get by with a supermarket job and a weekly event, where fans still turn up to see him perform. The film is refreshing in that it captures a side of America we don’t often see. Widespread poverty, basic healthcare and living on the breadline are all here, combined with the craft of wrestling.

His career may be on its last legs, but physically the years of wrestling have taken their toll. Unfortunately his personal life is also a mess and it seems beyond salvation. The two main females (Marisa Tomei, Evan Rachel Wood) also perform admirably in the gritty environment.

You shouldn’t deny yourself this film simply due to the fear of men in spandex. The camaraderie between the wrestlers and how they organise (and endure) bouts hammers home what a tough spectacle it can be.

Rourke at his best - The Wrestler review by PT

Randy the ram is a wrestler who should have retired about a decade ago. Wrestling in local halls and small time venues, the once famous Randy still ploughs on as its his life, his calling, his love. Rourke is brilliant as the wrestler who doesn't know when to pull the plug.

Marisa Tomei is also outstanding as the pole dancer Randy has the hots for, will she won't she, some outstanding close ups of her expressions stick with me.

His attempts to reconcile with his estranged daughter are moving and tragic. Top notch indie film.

The bigger they used to be, the harder they fall... - The Wrestler review by Count Otto Black

By far the best thing about this film is Mickey Rourke's truly magnificent performance, which as cinematic portrayals of washed-up pugilists go is up there with Robert DeNiro's in "Raging Bull". I'm not sure which is better, but it has to be said that Randy the Ram is a much nicer guy than Jake LaMotta, and if he's no better at relationships, it's for entirely different reasons. This battered old wreck who can't grow up and lives in a dismal caravan surrounded by tacky souvenirs of his long-past glory days may be irresponsible, not too bright, and still sporting terrible eighties hair in his fifties, but he's oddly lovable, and he deserves a break.

Of course, this being a Darren Aronofsky film, what are the chances he's going to get one? He's an obsolete poverty-stricken has-been, both the women in his life are even more emotionally damaged than he is (in the case of his daughter, it may be his fault, but we're given so little backstory that she comes across as a bit crazy), and on top of all that, he finds out early in the film that his heart's in such bad shape that to carry on wrestling would be literally suicidal. Is there any possibility whatsoever of a happy ending?

The script is rather lazy, with too many plot-points that are predictable clichés. Will our hero last long in a job which seems specifically designed to humiliate him beyond endurance? Go on, guess! The Ram's fellow wrestlers have tremendous camaraderie and warmth that almost amounts to love, even while they're beating each other up in ways that have to be seen to be believed - seriously, staple-guns?! - whereas the women he desperately tries to connect with are traumatized wrecks who seem barely able to relate to anyone. The 20th anniversary of the fight which marked the pinnacle of his career is approaching, and he has to decide whether or not to relive that triumph one more time. Will he listen to the advice of his doctor?

This is one of those movies where the ending is so inevitable it might as well have been the beginning, with the rest of the film showing us how the hero ended up there, and I was coldly impressed without actually enjoying it. It's just as well Aronofsky wasn't allowed to make that Batman movie he nearly directed. It would have made "Dawn Of Justice" look like "Lego Batman".

Strength vulnerability and immorality - The Wrestler review by JD

This has the machismo of Rocky with moments of contrasting tenderness. This superficial character spends all day body-building and all night hiring prostitutes and snorting cocaine. He is a bad boy hero and not one that draws you to him. The vulnerable scenes were not well acted or directed but made good sense to the plot. The film is a cult classic but didn't really grip me.