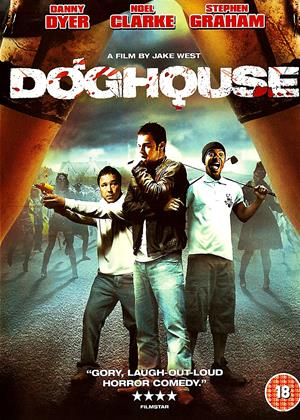 Battle-of-the-sexes film where man-eating women zombies attack and eat all in their path – well, all men – and especially a party of jack-the-lads out for a beery, womanising weekend. Plenty of gore but not much humour and definitely not PC. Watch this if you like lager, football, vindaloo and think that all a woman is good for is housework. 2/5 stars.

I really enjoyed this. OK it is no SHAUN OF THE DEAD in comedy horror zombie stakes. And it is no SEVERANCE either which is the better film of a group out in a strange place in the woods. THE RITUAL is a seriously scary version of this sort of thing too. This film though looks are feel cheap and stagey. And becomes an OTT Grand Guignol blood and guts fest. It is what it is.

However, what is REALLY refreshing is the lack of pc - and it is very un-pc at times. Probably wouldn;t be allowed not - or maybe the other way round only with women killing male zombies. 2009 was a saner time.

BUT it does not take itself too seriously and is tongue in cheek always SO any wokies or feminuts who have an issue with it, should go back to gurning over Sylvia Plath whinge-gest poems or watch the femiwhinge fantasy Handmaids Tale or watch manhating femi-TV or the BB-She, and steer well clear of this.

I laughed and rolled my eyes and generally let myself go - so enjoyed this for what it was.

I never like Noel Clarke as an actor - so stagey, fake and over-rated - every character he plays is always Noel Clarke. BUT I like Stephen Graham and other actors here like Lee Ingleby.

Some of the female zombies are GREAT - especially the big mama! Others are fun. The plot s nonsense - but the same can be said of most horror films and most Hollywood movies too, even Oscar winners.

4 stars. One for the lads - get the beers in! Very refreshing in these woke and broke pc New Puritan times.