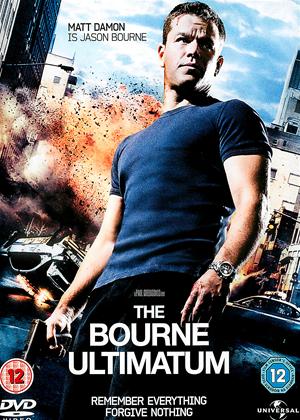 Reviews (4) of The Bourne Ultimatum

Really Enjoyable - Not to be missed! - The Bourne Ultimatum review by CP Customer

Really enjoyed this film. Had all the ingredients of the other 2 Bourne films - action, tension, bad guys who you could just strangle!! It's great as it keeps you gripped all the way – no dragging and no irrelevant bits. The scenes in Morocco are especially edge-of-your-seat action and the special effects are brilliant!!!

It really does put the cherry on the top of the trilogy. As always, Matt Damon's acting was spot-on.

So, my final words - Watch this...you will not be disappointed!!

Bourned Out - The Bourne Ultimatum review by CP Customer

Maybe I have just had enough of slick high action thrillers, but this did not live up to the storyline and feel of the first two Bournes, I just waited for the next amazing crash, car chase, Jason running woodenly through stations, streets, undergrounds, but he is a fine actor and without him these movies would not have been so good. I can see the first two Bournes over and over again, but not the third. Is there a fourth in the pipeline? Hope not. But he is still alive....

The best of the Bourne bunch in my opinion. It was non-stop action from start to finish and real edge of your seat tension-building stuff. Clever direction and one of the best car chases of all time. Matt Damon is totally convincing as agent of mass destruction Jason Bourne, trying to discover his true identity. Excellent ending, which answers many questions from previous films in the series, although it could be equally enjoyed as a stand alone.

superb throughout. very cleverly linked to bourne supremacy. the plot and action as ever are non stop and gripping. if you enoyed identity and supremacy, you will really love this. and oh yeah, Bourne 4 (thats what its gonna be called apparently) is being worked on for a 2010 release...bring it on!