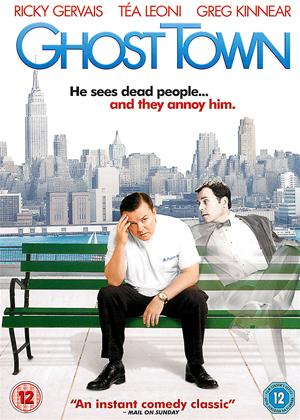 Bertram Pincus is a grouchy and bad-mannered middle aged English dentist living in Manhattan, New York. Bertram hates people; he lives in the apartment building next to his dental surgery to avoid mixing with commuters, stuffs patients mouths with cotton to stop them from speaking and avoids any unnecessary contact with work colleagues. When Bertram goes into hospital for a colonoscopy under general anaesthetic, he dies for seven minutes and when revived leaves hospital to find he can see and communicate with ghosts, all of which want his help to finish their personal business on Earth. The most forceful of the ghosts is Frank, a sharp talking businessman and adulterous husband of Gwen, an Egyptologist who lives in Bertram's apartment building. After constantly being harassed by ghosts and worn down with lack of sleep, Frank manages to make a deal with Bertram, if he can break up the engagement between his widow and her do-gooder lawyer fiancé, Frank will make all the other ghosts go away. Bertram then embarks on forging a relationship with Gwen in order to complete his side of the deal, the trouble is Bertram soon realises he’s falling in love with her. While it’s doubtful Ricky Gervais is ever going to win an Oscar for best actor, he does a fine job in this film and makes the character of Bertram fully formed, completely believable and throughout the film progressively more and more likeable. Greg Kinnear is a solid support and Tia Leoni is a clever choice as the attractive, intelligent though believable romantic interest for Bertram. The pacing and direction of the film is good with some beautiful shots of Manhattan and the dialogue is sharp, funny and well suited to Gervais’ dry wit and comedic timing. Overall the film is a funny and engaging mix of comedy, romance, drama and human redemption, and the final 20 minutes of the film are exceptionally sweet and tender. And while the story is a bit predictable, the interesting, likeable characters, charming nature and sheer quality makes this a must see.

An alright movie. Typically Ricky Gervais - good comical delivery but never laugh aloud. The ghost thing has been done many times and still brings a smile but I preferred Randall and Hopkirk deceased! A very watchable movie though without the need to concentrate too hard on the story line.

If you found Ricky Gervais role in night at the museum good you will enjoy this extended version. I hate to say it but he seems very one dimensional. As an actor he makes a great half hour comic. Its not that I dont like him. I went to see him live at the apollo, its just that he doesnt seem capable of transfering his short term hillarious comedy skills to "the big screen". I feel he (along with quite a few others) gets the big roles because they are "famous" not because they can do it.

The story is old and this did nothing to enliven a tired script.

weak story line not funny wonder why it ever got made not watchable at all The story is old and this did nothing to enliven a tired script.