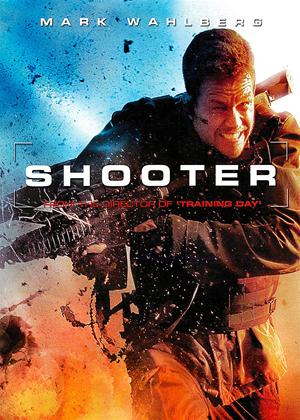 Nothing new here; it's the story of an ex army hero who is lured out of retirement and then framed for an assassination attempt on the president. It is done well, however, which makes the film enjoyable. Some good action sequences and Wahlberg plays the hero adequately.

Mark Wahlberg plays good and well acted film with non-stop action. Worth the watch and will not be dispointed with this film.

You've seen it all before - Shooter review by RP

Hmmm... I was hoping against hope for something better than this: it's just plain silly, a mish-mash of every assassinate-the-President / conspiracy theory / revenge film you've ever seen. Super-sniper Bob Lee Swagger (what? are people really called that?) is conned and framed for an attempted assassination and sought by the combined forces of FBI + police. While shot and injured he (of course) defeats all before him and (of course) gets his revenge on the baddies who have set him up and (of course) gets the woman. Unbelievable, mindless twaddle.

However, switch off your brain, sit back and let it wash over you and it becomes a fairly standard action flick, with all the usual car chases, shootings, explosions and a high body count. You will have seen the plot – and the action sequences – over and over in all the similar films you've watched over the years.

I have seen worse films so I'll have to give it 3/5 stars, but it really is disappointing, below average stuff and despite this rating I really didn't like it much.

Wanting the good guy to win - Shooter review by AB

Storyline is not new, action shots neither, the outcome - very guessable.

But, this is one of those films that make you wonder - "what if this was me?".

Enjoyable without being trite.