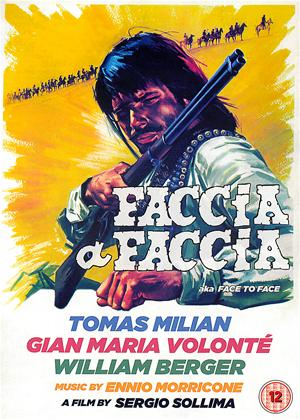 Reviews (1) of Face to Face

One of the things people often forget about spaghetti westerns is how political they were. For some reason a disproportionate number of the directors of these films were extreme left-wingers who tried to include their ideology in their movies, with mixed results. It's perfectly natural for characters in a movie set during the Mexican revolution to be anti-capitalist, but the director must never forget that 99% of the audience paid to watch an impossibly lethal gunfighter shoot the rest of the cast to smithereens, not listen to speeches about politics of any kind.

Sergio Sollima (there were also a disproportionate number of spaghetti western directors called Sergio) doesn't quite pull off the required balancing act in this over-preachy parable about a mild-mannered history professor with TB who goes west in the hope that a drier climate will improve his health, gets mixed up with outlaws, and discovers the joys of doing, for the first time in his sheltered life, what a man's gotta do. Unfortunately he gets a wee bit carried away and turns into Hitler.

Gian Maria Volontè, best known for playing Clint Eastwood's deadliest adversaries in both the "Dollars" movies, dominates the film as Professor Fletcher, and though he does overact at times, he's a good enough actor to bring a bit of depth to his part, unlike his co-star Tomas Milian, best known for starring in the infamous "Django Kill!". Milian is adequate when it comes to looking mean and ornery, but it's hard to see why so many other characters find him irresistibly charismatic. And what's with that haircut? He looks like the bassist from Spinal Tap! It doesn't help that his character is called Beauregard. Or indeed that his girlfriend is a dead ringer for the young David Bowie. He'd be fine in a more typically daft spaghetti western where all the hero wants is revenge or some gold or something and there are usually acrobats involved for no reason at all, but in a movie this serious he seems a bit lost.

It's also plotted in an oddly lopsided way, as if it was meant to be significantly longer but the money ran out and they had to cut a lot of scenes towards the end. Professor Fletcher's rise from total obscurity to being the most wanted and feared outlaw in the west seems to happen overnight, on the strength of precisely one robbery that wasn't what you could honestly call an unqualified success. And how exactly does Beauregard get out of jail? There's certainly one event which would have been the dramatic high point of the entire movie if we'd actually seen it, but it would also have been very expensive to film, which is no doubt why it happens offscreen, considerably diluting the power of the message the director is trying so hard to put across.

As the story of a doomed friendship between two very different men who learn both good and bad life lessons from each other it works fairly well, but the professor's transformation from a kindly, mild-mannered wimp into a murderous psychopathic rapist who thinks he's Professor Moriarty mashed up with Alexander the Great is a bit much to swallow. "A Bullet For The General", made the previous year and also starring Gian Maria Volontè, is a very similar film indeed, but it does a much better job of not letting its serious political point get in the way of the story, and when it promises you a battle, it jolly well gives you one! Whereas this is an ambitious, well-meaning, and peculiarly disjointed film that doesn't quite hit its marks. It has a bit of a cult reputation, but I suspect that most of its fans are applauding its trendy politics rather than its middling quality as a western.