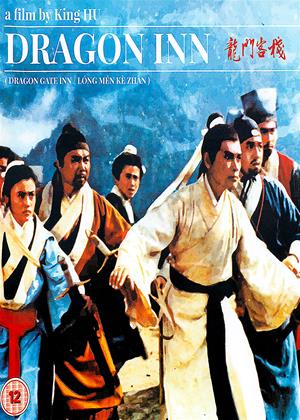 This movie, which is essentially a first draft of King Hu's masterpiece "A Touch Of Zen", has gained a cult reputation that, unfortunately, is only half-deserved. The action sequences are just fine. In fact, for the time (1967), they're frequently rather more than fine; that was always King Hu's strong suit. Characterization and plot aren't so good. One problem is that the film is trying so hard to be a Taiwanese spaghetti western that it concentrates more on ticking the generic boxes than making any sense whatsoever.

The action mostly occurs in and around what is basically a Mexican cantina, except it's in China, accompanied by a spectacularly bad soundtrack that frequently rips off Ennio Morricone note for note, when it isn't relentlessly sampling Mussorgsky, mostly one very short musical phrase repeated far, far too often. Even the ethnically authentic bits are sampled from traditional Chinese folk-songs, so the "composer" didn't write a note of it, except maybe the extremely annoying wood-block percussion riffs used to indicate that what we're seeing right now is exciting, in case the fact that everybody is hitting everybody else with swords hasn't given us a strong enough hint. I mention it because, as bad soundtracks go, this really is a howling clunker, and if that sort of thing offends you, you should know.

King Hu's trademark feisty young woman who only needs the hero's help because she has trouble fighting multiple armed men all at once when they start running into double figures is memorable without being interesting, because she has so few other character traits that even the hero only manages to notice that she's female for about two seconds before forgetting again. As for the hero, he's literally a hero who just happened to be in the room when he was needed, and that's all there is to him. Oddly, much more effort goes into giving minor characters personalities which are mostly irrelevant because they aren't on screen long enough for it to matter, though it's nice to see a couple of expendable henchmen get so much backstory that they change sides and become major characters after all. But when the bizarrely bleached blond villain suddenly displays ludicrous superpowers that would have allowed him to make this a very short movie if he'd remembered he had them an hour and a half previously, it's a Pythonesque moment just when we're supposed to be taking everything very seriously indeed.

Overall, this is an entertaining action movie, but there isn't one scene that comes within a light-year of the bamboo forest fight in "A Touch Of Zen", and the complete lack of any plot you care about enough to actually remember it ten minutes after it's been explained puts this epic bout of chop-socky firmly in the B-list. It's still fun though. This disk includes an unintentionally humorous featurette in which the ultimate geeky fanboy lists everything wrong with the film and breathlessly explains why it's actually a virtue, while repeatedly name-checking the person who in an ideal world he would be married to, Quentin Tarentino. Whatever some people may think, this doesn't make it a towering artistic triumph.

I wasn't thrilled when this one came through the letterbox. It was buried deep within one of my rental lists as a result of a long since aborted notion I had of trying to watch every single film mentioned in Mark Cousin's The Story of Film documentary, but I'm not ordinarily a fan of martial arts / wuxia films. Earlier in the year I had watched House of Flying Daggers (on my rental list for the same reason) which I had found to be one of the most genuinely tedious and po-faced films I have ever sat through, which put me off even more.

Thankfully this was at least a much more entertaining watch, being essentially a mash up of a wuxia film with a spaghetti western - and I do love spaghetti westerns. It's all extremely silly (as noted by the previous reviewer, there are echoes of Monty Python at times) but quite good fun. In fact, I would suggest that viewing this as a surreal comedy is probably the best approach to getting some enjoyment out of it. The soundtrack is absurd, heavy-handed and derivative - but if I'm honest, I quite enjoyed that! It fits perfectly with the sense of silliness that pervades the whole film. I particularly liked the weird, woozy music that accompanied the seemingly interminable final showdown with the villain, an asthmatic eunuch who occasionally teleports himself from tree to tree.

I have no idea if this film was intended to be viewed seriously, but I would suggest that as long as you abandon any such notion, you might fun this to be an acceptably diverting bit of fun.