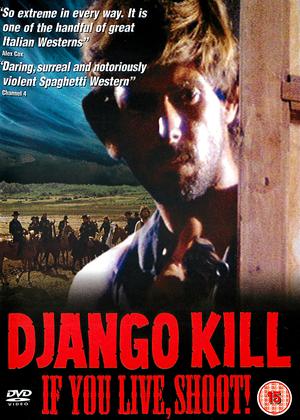 Synopsis:
Tomas Milian is The Stranger, a bandit left for dead by his gang, who have made off with the stolen gold. Rising from the grave, he will seek revenge, with his pistol loaded only with gold bullets. The Stranger's quest leads him to a strange town known only as 'The Unhappy Place', where he discovers that only one of his executors has escaped the sadistic fury of the towns people eager to rob the stolen gold. The Stranger becomes caught up in the conflict between the townsfolk and a crazy rancher, Mr.
Zorro (Roberto Camardiel), and his band of sadistic black-clad 'muchachos' and drawn into a bizarre world of gruesome torture, mindless violence (a man shot with a gold bullet is literally torn apart - still breathing - by the townsfolk frantically searching for more gold bullets), sexual depravity and unfathomable madness.
Actors:
Tomas Milian, Marilù Tolo, Piero Lulli, Milo Quesada, Miguel Serrano, Francisco Sanz, Ángel Silva, Sancho Gracia, Mirella Pamphili, Ray Lovelock, Roberto Camardiel, Patrizia Valturri, Calogero Azzaretto, Lars Bloch, Frank Braña, Sisto Brunetti, Ann Collin, Gene Collins, Rafael Hernández, Antonio Pica
Directors:
Giulio Questi
Producers:
Giulio Questi, Alessandro Jacovoni
Writers:
Franco Arcalli, Giulio Questi
Aka:
Se Sei Vivo Spara
Studio:
Argent Films
Genres:
Action & Adventure, Classics
Countries:
Italy

Reviews (1) of Django Kill: If You Live, Shoot!

It's hard to know what to say about a film like this, except that if you want to watch a Surrealist spaghetti western that isn't "El Topo", it's probably your only option. In conventional terms, it's a deeply distasteful, totally incoherent mess. Which, by the way, has absolutely no connection with Sergio Corbucci's "Django", being one of about 50 unofficial sequels, many of which simply redubbed the hero's name in what had been made as a stand-alone movie. The "hero" of this film explicitly doesn't have a name at all, the only reference to Django being in the hastily-changed title. I put "hero" in quotes because he isn't what you would normally call noticeably heroic. After his initial quest for revenge becomes irrelevant very early on, he spends almost the entire film being passively manipulated by just about everybody while the town (also explicitly nameless) self-destructs around him, before finally bringing justice to the baddies in a manner which, while suitably apocalyptic, can only be described as cheating, and will be extremely uncomfortable viewing for anyone who likes horses.

Essentially, this is an ultra-violent spoof of the New Testament, with a protagonist who is mistaken for some kind of messiah by two indians who believe (wrongly) that he rose from the dead, and is only able to properly unleash his wrath after suffering an incredibly blatant parody of the crucifixion with added vampire bats! There are even suggestions that the town where all this occurs has so much profoundly wrong with it that it might be Hell - nobody actually says so, but one character does remark that "it sure ain't Heaven". This would explain why almost all the townsfolk behave exactly like the gleefully sadistic undead yankee slayers in "2,000 Maniacs".

Talking of ultra-violence, this is the uncut version, and includes two extremely gory bits missing from most prints: the scene where a greed-crazed mob dig for gold bullets in the body of a man who isn't dead yet, and a very explicit scalping. One other word of warning: by modern standards, this movie is pathologically homophobic. Several "good" characters, including the hero, are implicitly in the closet and all mixed up about it. As for the villain, he's got a private army of predatory homosexuals in matching black dude ranch cowboy suits! Thankfully the studio put its foot down and insisted on the script being amended before filming started, otherwise this director's cut would have included a scene where a boy is buggered to death.

It's a bad western and a barely comprehensible film of any kind, but it's so unconventional that normal critical standards are meaningless. Like "Eraserhead", it is what it is (whatever that is), and you're unlikely ever to see another film like it. Your mileage may vary on whether or not this is a bad thing.