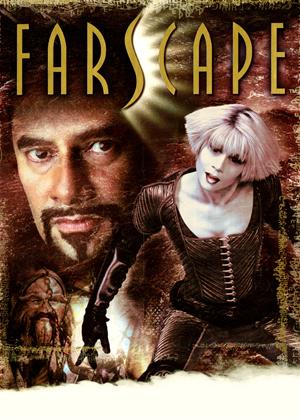 Farscape was one of the more unique sci-fi series to come about at the end of the 20th century. There was no shortage of space operas on television ranging from Star Trek to Babylon 5. But most of these space shows always seemed to have a clinical edge to them, posing more a prim utopia where idealistic characters touch on profound and philosophical topics with great concern. While that does make for rousing television, there comes a time when you just want a change of pace in the genre. Farscape was the answer to that call, acting as the rebellious black sheep of the sci-fi TV scene.

The premise was enough to hook me from the start. American astronaut pilot John Chrichton attempts an experiment in space to see if he can use the Earth’s atmosphere to slingshot a shuttle. His experiment goes awry, however, and he is flung through a wormhole that sends him millions of miles away to another galaxy. This part of the galaxy does have an armada force that patrols the planets but John doesn’t end up on that ship. He instead is captured by a prison ship that has been overtaken taken by the prisoners. This includes the disgraced warrior D’Argo, the rebelling guru Zhann, the dethroned emperor Rigel, and the captured pilot turned defector Aeryn Sun.

Aside from Aeryn, everybody else is of a distinct alien race. D’Argo appears as a towering force of dreads and muscles whiles Rigel is a creature so small he requires a chair to hover about the ship. All of them have a reason to escape the grasp of the Peacekeepers, considering John soon becomes a fugitive for having accidentally crashed into a Peacekeeper craft and killed the pilot. And that pilot just happened to be the brother of the mad General Crais.

I really dig the design of this show where the Jim Henson Workshop put a lot of work into assembling the many alien creatures of this universe. One of the most notable is that of the prison ship’s operations commander, a creature simply referred to as Pilot. With a uniquely shell-like exterior and four arms operating multiple controls, he’s a mesmerizing design that serves as the organic link which makes the living ship of Moya all the more compelling a character. It’s also not every sci-fi show where you see a starship have babies but this becomes an entire season-long arc!

Nothing seems off-limits for a show such as this. The characters, a collective of both outlaws and misfits, engage in all manner of questionable behavior, ranging from getting ridiculously drunk to sleeping with each other to throwing themselves into dangerous heists. This wild range of stories allows the show to be as ridiculously absurd and breathtakingly touching as it can possibly be. It also means that John doesn’t have to be some stoic fish-out-of-water character but can become frustrated with the situations he encounters, often resorting to making pop culture references only he will understand.

But there’s still some strong serialization present to keep viewers invested amid all the stand-alone episodes. Every character has an end goal in mind. For the many members of Moya, as well as the passengers they pick up along the way from the sexy Chianni to the rambling Stark, everyone essentially wants to go home. John, of course, wants to find the next wormhole back to Earth. However, so would the sinister villain of Scorpius, aiming to use the technology of generating a wormhole to aid in his quest for power.

There’s such wonderful personality oozing throughout the series that it’s hard not to be won over by its charms, whether you’re into science fiction or not. Episodes can range anywhere from compelling space opera politics to trippy visions of the characters in unorthodox situations. The show becomes particularly surreal, silly, and more creepy when Scorpious implants himself into John’s head, constantly torturing his psyche by tapping into all his memories. It’s no wonder that soon after the abrupt cancellation of season 4 (when season 5 was promised) the fans rallied together to bring the show to a proper closure with The Peacekeeper Wars miniseries. Any show with fans that committed to a franchise is a show worth noting and Farscape stands head over heels above its competition, existing in a category of sci-fi television all its own.