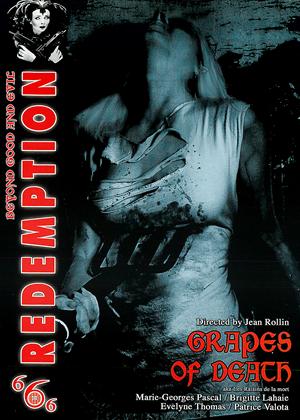 Reviews (1) of The Grapes of Death

When settling down to watch a Jean Rollin film, the viewer is fairly sure it will contain either nude/semi-nude vampires, a beach scene, two young girls as main characters and/or much surrealist atmosphere. Such things are the staple of the prolific French director.

It’s something of a surprise then, to find none of these elements here. At first, two girls appear to be the film’s main double act, but one of them is killed a couple of scenes later in one of many shock twists this tale has to offer.

This is Rollin’s most straightforward horror film. And it is truly frightening. Of course, there are scenes that border on the dreamlike, such as a blind girl dressed in white tiptoeing unknowingly into the path of many zombie-like creatures that literally stumble out of the shadows.

There also appears to be a decent budget here, one that provides a realistic beheading (another unexpected moment), many explosive effects and some truly repellent make-up for the many characters infected by the ‘grapes of death’. The scenery is breath-taking and beautifully shot – often in conditions so cold, that apparently the putrefaction make-up would freeze to the actors’ faces.

Through it all, seemingly immune to the virus, is Elisabeth (Marie George Pascal) – well, until the final scene; the film is open-ended, open to interpretation. I would recommend this to anyone new to Rollin’s work.

My favourite scene involves a decaying man who chases Elisabeth back into her parked car, which naturally fails to start. As she locks the doors, he head-butts the glass to the front door, leaving much of his dissolving forehead on the glass as he recoils to butt it again. Truly stomach churning.