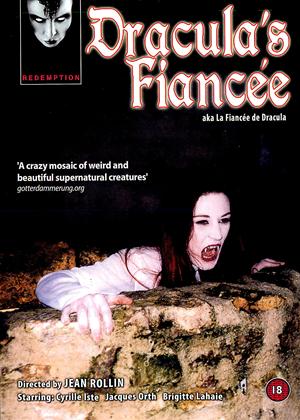 This is a film widely regarded as a return to form for French director Jean Rollin and was released in 2002, 34 years after his debut. And it really is – everything is here; scantily clad young actresses enduring freezing looking, exotic locations, a finale set on a beach, a meandering storyline (which, on this occasion, takes in a Van Helsing subsititute, a circus dwarf, comedy nuns and even a cameo from Rollin veteran, my lovely Catherine Castel. Castel’s appearance is so brief, I’m not entirely sure who she plays, but it seems likely she is the unnamed female who is released from a coffin to play a mournful violin as a tribute to the arrival of Dracula’s titular fiancée) and plenty of blood. There’s even a nod to his earlier Shiver of the Vampires in that an old grandfather clock is used for transportation and resting for the vampire

The dreamlike quality of story-telling is still very much in evidence here, and as such, a coherent storyline is almost an irrelevance. It seems mad killer nuns are grooming a young lady called Isabelle to be Dracula’s bride, which seems fair enough. When he finally appears after being whispered about in hushed tones, Dracula is a disappointment – just a pleasant looking gent in a cape who pales into insignificance alongside the sensuous, snake-like ethereality of his former, red-haired, white-faced partner.

I thoroughly enjoyed this film, it is a relief to see Rollin’s imagination and skill for creating illusory weirdness so prevalent in his later life. The music, so important for setting a scene, is very effective here also.

The whole film is delightful, mad and macabre, possibly Rollin’s most joyful yet. There is a happy ending too, of sorts – it’s very surreal, but gives the proceedings a memorable closure.