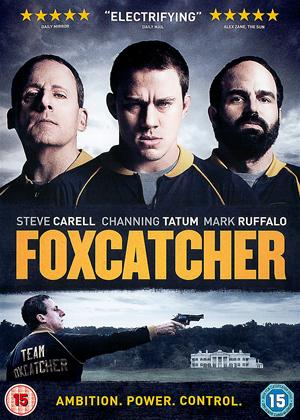 Foxcatcher gets you in a hold and keeps you there until the credits. - Foxcatcher review by PT

This film shows that Steve Carell is a superb actor and not just a comedy giant. John Du Pont (Carell) is a multi , multi millionaire monetary wise but the polar opposite in the richness of life. Hen pecked by his dominant mother, always striving for her love and admiration, he is so socially awkward. Longing to belong and be respected he starts to train the Olympic wrestling team, knowing as much about the art of this combat as Mr Burns, who he resembles in his attempts at the physical stuff. Tatum is brilliant as the not so clever Shultz brother, as is Ruffalo as the shrewder half of the wrestling siblings. The way that Due Pont treats the younger brother (Tatum) is bound to lead to conflict between the trio. This movie is tremendous, some of the best acting I have seen in a long while.

The super-rich Du Pont, who becomes mentor to Olympic champion Mark Schultz, is one of the eeriest characters I've seen in a mainstream movie for a long time. Pitiable but not likeable, it's clear that despite his wealth he is desperately insecure and lonely and feels marginalised by his mother's success as a renowned racehorse trainer. At the same time, his benevolence is mixed with an evident sense of entitlement and self-importance. He doesn't mind taking credit for his Team Foxcatcher's success even when he has done very little to earn it.

At first, Mark thrives under Du Pont's guidance, but later begins to self-destruct, perhaps because his dependence on a wealthy benefactor has undermined his self-respect (although being plied with cocaine can't have helped much either). Salvation comes in the shape of his older brother, who agrees to move to the estate to give Mark some moral support and stability. Unfortunately, Du Pont's escalating paranoia ensure that the arrangement is not going to last.

Tatum is outstanding as Mark Schultz, whose formidable prowess in the ring is, sadly, not accompanied by personal confidence or career success. It's easy to see how he could be over-awed and manipulated by someone Du Pont. The wrestling scenes are very authentic-looking and both he and Ruffalo must have trained hard. I especially liked the scenes where the two brothers are together - Dave, like Mark, is a man of few words but you can sense the deep emotional bond between them.

From what I've read, Foxcatcher is an accurate depiction of real events. But even if it were fiction it would still be a compelling portrayal of ambition, jealousy, and what happens when two men of drastically different backgrounds and life expectations come into contact.

Most boring film ever - Foxcatcher review by SL

Waited for this film to get going and it nearly did in the last minute. Story although true still weird. Absolute rubbish give it a miss.

This is a film I wasn't looking forward to but 15 minutes in I was totally hooked it's a slow burner but not in a boring way throughout the film it has a slow sense of dread leading to the climax....... And surprisingly for this age of film no bad language

No wrestling with emotions here. - Foxcatcher review by BE

A thoroughly miserable and unendearing movie. Over two hours spent watching this very slow burner, devoid of all humour and with an even more miserable ending. I was not aware of this 'true story' and I've no idea why anybody would want to bring it to the screen. One star for the fine acting from all three main characters in this no hoper of a movie.

Gem of a movie - Foxcatcher review by DC

This is an understated gem of a movie. 5 star rating for the acting and editing. Olympic style Wrestling is a minority sport in UK and I was uncertain about watching this film. I was encouraged by the positive reviews and I hope my review will encourage other people to watch and enjoy this film.

Different to the Netflix documentary - Foxcatcher review by AW

The film is a little slow but the acting is excellent especially from Steve Carell who is almost unrecognisable.

Film is heavily focused on the wrestling brothers and doesn't touch on the other wrestlers which is somewhat different to the documentary.

After a very slow build the dramatic ending seemed a little rushed.

Carrel gets a major nose job on this one. Is quite an odd character in this one. Hint of disturbing.

Another true story of gun rule again in US. If had been a hammer or a spade the outcome may have been different.

Fox catcher is not based on a true story IT IS a true story and that's what makes it hard viewing. All the leads are solid , Channing Tatum, Mark Rufallo and the stand out (due to his switch from comedy to drama) Steve Carell. previous posts have explained the plot I would only add that this is not a feel good sports movie but a dark drama about hope and envy.

There are two types of wrestling in Foxcatcher. There’s the actual sport and then the more psychological. The characters are seen struggling through their feelings buried so deep behind their dumbfounded faces of gaping mouths and glazed eyes. It’s a movie that attempts to find something more behind a strange tale of sports training that pushes men to their very limits of their physical and emotional states. And once they boil too long, the explosion is both horrific and tragic.

This true crime movie follows the lives of Olympic wrestler Mark Schultz (Channing Tatum), his Olympic wrestling brother Dave (Mark Ruffalo) and rich wrestling enthusiast John E. du Pont (Steve Carell). The three converge at John’s estate to form Team Foxcatcher, a wrestling team he assembles for the Olympics. All of them are at different stages in their career. Despite winning the gold medal prior to meeting John, Mark is very quiet and easily frustrated with where he wants to go in life. He wants to be the absolute best and nothing less. Failure is the ultimate destruction which results in self-inflicted destruction. He fails a match punches himself multiple times in the face before smashing his head into a mirror. Nothing else in life matters besides wrestling. But for his brother of similar fame, it doesn’t hold as heavy a spot. Dave has a family and is quite happy to turn down John’s offer for a comfy lifestyle. He is the rock of a coach needed to hold Team Foxcatcher and Mark together.

On the other end of the spectrum is John, the most quiet and damaged of the three. He has all this wealth, land and sports acclaim, but is never truly happy. His disapproving mother looks down on his interest in wrestling as a lesser sport that breathes with homosexual tones. She never directly states this and John never admits to anything either, but it’s there. John’s anger is very silent, hidden behind his mute face and docile tone. He is by no means a stable man and that’s part of what draws Mark towards him in the first place. They see something in each other, despite coming to blows over Mark’s determination.

There are drugs involved and there’s a fall from grace, but it never feels overdone. There’s a strict focus on the characters and their coldness with being shut off from the world around them. Most of the film takes place at John’s estate packed with old paintings in large empty rooms. The wrestling scenes - for as many as there could have been covering the World Wrestling Championship and Summer Olympics - are tightly shot and minimal. We never hold on these moments for too long because the focus is not the grand spectacle of the event. Mark and Dave have both been to the Olympics before and are aware of the process - the movie doesn’t waste time making their Team Foxcatcher matches overblown. In fact, these scenes could have been removed from the movie and it would still be completely engaging.

The biggest showcase of the picture is Steve Carell. He melts into the role of John du Pont with a fragile and creepy performance that never oversteps its bounds. That’s not to say that Tatum of Ruffalo do a bad job either, but they’re mostly playing to their true strengths and talents for these roles. Carell is venturing far outside his comfort zone from the usual loud persona he brings to other pictures. When he isn’t mumbling with his glazed expression, he’s staring blankly while deep in thought and anxiety hidden away by his nearly comatic state. You know he’s going to snap at some point, but such an exterior makes it a mystery as to when his frustrations will takeover.

Foxcatcher is a subtly intoxicating examination of the big blows dealt to the men of wrestling. The sacrifice of mind and body has never been more deep and tragic as portrayed by the silent giant Tatum and the silent villain Carell. For as long as the movie plays out, it rarely felt as though a scene were wasted, but still takes just enough time to create a mood and an atmosphere. From the cold mornings of jogging around the du Pont estate to the uncomfortable silence of John’s trophy room, all of it feels worthy of attention. It’s so effective in taking a critical eye to this fascinating crime aspect of Olympic wrestling that even Mark Schultz himself admitted the film was a miracle. He previously thought it was going too far for establishing homosexual undertones, but the tones were subtle and honest that it’s more a determination of the viewer than pushed by the director.