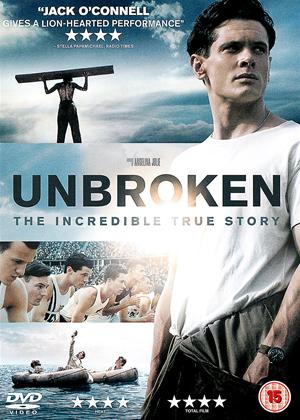 It's taken me a while to watch this but I'm glad I did. This is an engaging true story that shows how someone can carry on through the loss and highs. The strength of Louis from his success at the Olympics to being a prisoner of war and the courage to battle his demons is very powerful. Highly recommend.

Incredible. That it is a true story is a very powerful testament to courage, determination and ultimately, faith.

Another year, another war film. Recent years have brought us war epics about fighting on the front lines, intellectual feats to break codes, and now we will see the struggle to survive in captivity. Unbroken has received a lot of media attention due to Angelina Jolie being the director, but it is important to look past this and see the film for the amazing depiction that it is.

Unbroken follows the life of Louis Zamperini. The story of his childhood and inspiring Olympic success is harshly contrasted by his horrific WWII experiences. Louis has survived a plane crash, forty-seven days at sea, and capture by the Japanese army. But, does he have enough left in him to make it as a POW, or is this one race he won’t be able to finish?

Plain and simply, the story is beautiful and inspiring. It is a true telling of what happened those handful of decades ago, and further cements in our minds how strong the Ally fighters were.

Obviously many elements went into making this film worthy of four out of five stars. The acting was one of these. It would take forever to compliment everyone in the cast, but you can’t talk about this film without talking about Jack O’Connell. He not only plays the lead role, but, without him, I don’t think we would have been able to get as invested in this character - and that would have been unfortunate for us.

I am apparently one of the few that have absolutely no interest in Angelina Jolie and the details of her marriage and life. So, despite hearing good things about this film, I wasn’t overly interested. That was a mistake. Jolie needs to just stay behind the camera now, and give us films like this. She did a brilliant job, particularly with her use of slow pans that starkly contrasted the turbulent imagery.

There are no two ways about it: this film is visually stunning. Its combination of visual effects and live-action is flawless. It takes us from the serene blue skies to the dirty, shell-blasted, prison camps, and everywhere in between.

The writing (at least in part by the Coen brothers), was era-relevant, and the crew really worked hard to take you back to the time.

It’s unfortunate that even films like this are targeted by ‘trolls’ who denounce it as a work of American bravado. There are thousands - if not millions - of people who know that these horrific acts truly were inflicted by Japanese soldiers, and yet they attempt to rewrite history. That is why films like these are so important; because they continue to show us what happened, lest we forget.

Despite these comments from a minority, the majority of audience members have responded quite favourably to its story. Critics have also commented similarly, but felt Jolie had tried to tell too much of the story in one go, and that the speedy hero Zamperini wasn’t shown for all that he was.

I would recommend this film to anyone, and I think it was fantastic.