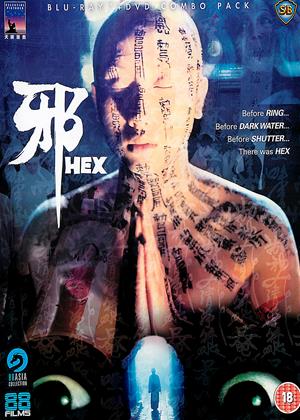 The Curse Of The Pole-Dancing Zombie! - Hex review by Count Otto Black

I almost gave this film one star. It's really worth about one and a half, but I'll go the full two for its sometimes genuinely atmospheric lighting, set design, and air of spooky weirdness. Unfortunately, that's about all that's good about it. Sometimes a movie becomes "legendary" just because you've never seen anything like it before, and for western audiences in 1980, this film must have come as a surprise, to put it mildly!

Firstly, the acting of the entire cast is both dreadful and completely over the top, and apart from the three characters who actually matter, nearly everyone is meant to be funny. I'm not a huge fan of that strange oriental brand of slapstick which intrudes into so many films supposedly aimed at adults, where people pull faces and bump into things as if the entire audience are either small children who got in by mistake or mentally retarded, and it's much in evidence here. Cross-eyed morons caper about in ways that would embarrass a clown at a kid's party, immediately before or after, or even during a scene you're meant to be frightened by. For much of its running time, this is basically a Hammer horror film starring the Chuckle Brothers. If that kind of thing makes you laugh, add another star.

The crudest tactic a horror movie can stoop to is the jump scare, and just about all the "scares" here are of that variety. Otherwise, the crude monster makeup and basic gore effects are about as good as what Hammer was providing ten or twenty years earlier, often worse. And several major plot elements, including the "surprise" twists, are pinched from much better movies the Shaw brothers obviously assumed their target audience weren't cinematically literate enough to be aware of, jumbled together in a way that doesn't make any sense at all.

The most extraordinary imagery in the film comes near the end, but unfortunately this sequence almost immediately degenerates into an excuse for a female character to perform a nude dance number more appropriate for a strip club that goes on forever. In fact, "excuse" is the wrong word, because there's absolutely no reason for her to do this, or indeed for her to have no clothes on in the first place. And then another lady strips off too and her body is shown at great length in extreme close-up, though at least she has a reason. One that was pinched from another movie, but never mind. This film is for grown-ups, and to prove it, here are some barenaked ladies. Enjoy.

Occasionally this kind of completely bonkers approach works, a good example being the truly deranged anti-classic "Hausu", but that movie genuinely embraces its own craziness and turns it up to eleven. This one simply assumes its audience are stupid, immature men, and gives them the kind of thing that would make a small child alternately scream and giggle, and then the female nudity they've probably sat through the rest of it waiting to see. You've got to admire the art direction though.