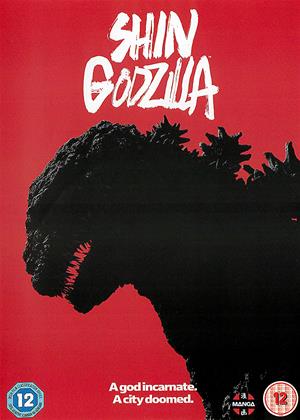 More realistic than the 2014 version without the cliched missiles fired and army attacking every five seconds or following a solitary hero doing his best to bring down Godzilla, yes this does look at the political ramifications for a reasonable part of the film but wouldn't that be the case if somehow a mythological beast did start to rampage through a city?...discussions would need to take place between leaders on repercussions of such actions and the collateral damage. This movie actually makes you feel your on the precipice of something unholy if you were living in Japan.

I used to watch the original Godzilla films years ago and enjoyed them for their slight cheesyness and big rubber monsters fighting each other.

This is a welcome return to the original look Godzilla, let's not mention the 1998 Hollywood anorexic version, but not much happens.

Not wanting to give any spoilers far too much talking, no where near enough monster action!!

When Godzilla is at full force he looks absolutely awesome but making it through all the talking was a bit of a slog with little payoff.

Not as good as I was hoping.

Godzilla ravages Tokyo while the authorities discuss what to do. Unfortunately they talk and talk. And talk. To call the film dialogue-heavy would be an understatement. It’s more concerned with bureaucracy and politics than with action and thrills. Shots of Godzilla are few, brief and repetitive. There’s no hero or heroine in peril to root for. The ropey monster effects hark back fondly to the heyday of Godzilla films, but this is a hopelessly bungled opportunity to bring the excitement of then to the audiences of now.

The 21st-century revisioning of Godzilla on the Japanese front carries with it a newfound sense of intrigue. Yes, the titular monster does look more terrifying than he once did before, showcasing a new evolution progress where he grows more powerful with each form before he becomes a towering monster that can shoot atomic beams from both his mouth and tail. But he’s not the singular most entertaining aspect of this tale. It’s the human characters trying to push Godzilla back from destroying all of Japan that becomes the more interesting focus. By this, I don’t mean that the handful of characters are interesting enough to carry the film on their own; Godzilla still has his monsters claws with a firm grip on the charisma of this franchise. Rather, it’s the very human nature and commentary on the bureaucracy that becomes more interesting.

When the slithering and gross-out version of Godzilla slithers ashore Japan, belching blood and smashing through buildings, the government springs into action as slowly as Godzilla himself. There’s a lot of talk about Godzilla’s biological form and what to do be done with evacuation and military orders. But it’s all very slow and placed behind a lot of red tape, where deciding whether or not to open fire on the giant monster. Decisions are not made at the drop of a hat. They go all the way up the chain and we see every phone call, conversation, and passing of messages that must be conveyed before a single missile is used against the giant monster.

To the untrained eye, this may seem like the standard role of the human in any Godzilla movie. They bicker, decipher, mobilize, and find themselves constantly taken down a peg by our titular terror. But look closer and you’ll notice how much the film romanticizes the civil servant duties with strict focus. There’s no room for jokes or a deeper sense of character; just titles and obligations. Pay close attention and you’ll see that our lead heroes seem far more concerned with how they’ll move up the political chain than questioning mankind's survival. It presents a semi-satirical edge to the picture, where even the deeper philosophy behind Godzilla is addressed for all but a moment as a test of Japan’s strong will.

If we want to get super film nerd on this film, we can compare Godzilla’s life to that of human existence. Most if not all of the human characters we see are all working towards the safety of civilians and the destruction of Godzilla without as heavy of a personal stake in all this. But Godzilla goes through an evolutionary process. He starts off somewhat mindless and soon becomes more capable, conscious and angry. He fights back against the coordinated systems of the Japanese and US forces trying to kill him, defending himself with atomic breath and his city-smashing girth. Soon, he is weakened and will eventually meet a frozen end, while the Japanese government continues to function. Even during brief gaps of Godzilla’s rampage, life continues normally with stock markets opening and work hours continuing as normal. And by the end of the picture, there’s no deeper questioning of mankind; just clean up and thinking about a promotion.

Shin Godzilla is worthy of its Japanese translation as the new Godzilla because it presents something we haven’t seen as much in the franchise. When there’s usually a commentary in previous movies, it’s fairly blunt and often stumbles. But here, there’s a real sense of focus, drive, and brilliant subtlety that can make the film just as enjoyable as a societal commentary on politics and city life as it does being a genuinely eye-pleasing monster movie of the legendary monster returning to the screen.