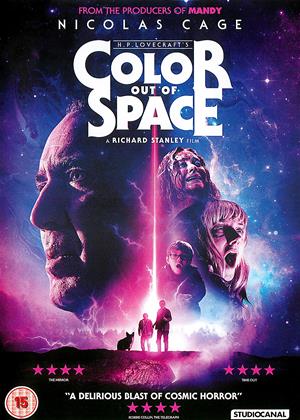 Reviews (8) of Color Out of Space

Engrossing Sci-Fi/Horror - Color Out of Space review by Spider

I was glued to the screen for this movie and thoroughly enjoyed it. It’s slightly art house in the style of Annihilation (and of course has a similar concept, based on a story by Lovecraft) but is still a gripping horror. The practical effects towards the end are reminiscent of The Thing. Nicolas Cage is relatively calm for the first hour but we then get the characteristic Cage mania at the end. Highly recommended.

A dreadful film, almost amateur in its production. - Color Out of Space review by DS

This is promoted as a sci fi film but in fact it is a very unoriginal derivative horror film. There is no coherent plot and the effects and ideas are all taken from other horror and sci fi genres. The first part of the film is slow and does not really gel with the later parts where the events become stupid rather than scary. The film cannot be viewed as really funny i.e. ott or as really scary. I have rarely seen such a bad film that has a reasonable cast. There are some awful B movies out there but this film has the look of a first project by a bunch of film students experimenting with CGI and special effects.

There are some very well produced and scary sci films e.g. Ridley Scott's Alien. The Color of Space is not one of these.

A good, solid adaptation of Lovecraft's classic horror story, without quite reaching the status of 'classic'. The main issue any visual adaptation is going to have is that the colour in the original is something so alien it cannot even be described, whereas here they've gone for a shade of purply-pink, so it's never going to feel quite as unnerving as the source material. Other than updating to the present day, the film pretty much follows the beats of the original story, and largely successfully so. In many ways this feels like a throwback to such 80's rubbery horror films as 'From Beyond' and Carpenter's 'The Thing', which is no bad thing. Slight in terms of plot, this is all about build up and atmosphere, before descending into full blown madness at the end. It may well feel slightly derivative to modern audiences unfamiliar with the original 1927 story, but that's really just an indication of how many people have tapped into that infected well of ideas since.

Horror in the woods - Color Out of Space review by Alphaville

This companion piece to Mandy begins with Nicholas Cage living an idyllic life with his family on a forest farm. It can’t last, of course. Weird things soon start happening, though at such a slow pace that it takes a while to build any momentum. When things do eventually morph into full-blown horror you either like this kind of stuff or you don’t. It’s better than most of its ilk, although it would be more interesting if someone could get our Nick to underplay rather than overact for once (compare, for instance, the impact of A Quiet Place). Some of the gross-out scenes are unintentionally funny and might have been more interesting played as such. Still, director Richard Stanley makes a good fist of the meagre material and it’s worth sticking with for the psychedelic climax. It’s also good to see Tommy Chong (of Cheech and Chong fame) still on screen.

Well Worth A Look - Color Out of Space review by GI

With any Nicolas Cage film you never quite know whether you're going to get rage Cage, trippy Cage or demure and serious Cage. With this horror/scifi hybrid you get elements of all three and it's makes for a rather enjoyable, psychedelic, phantasmagorical film. Cage is Nathan, a former artist, who now lives in a gothic style old country house in an ancient forest with his family, where he breeds alpacas. One night a strangely glowing meteorite lands in their garden and afterwards the flora & fauna begin to change and then soon Cage and his family too. First with mood swings and tantrums followed by physical transformations. There's some scary bits and some funny bits too, and yes the whole thing is downright bizarre but very, very watchable too and you'll end up enjoying this despite yourself. It has the feel of a good ol' Hammer Horror. Adapted from a short story by H.P. Lovecraft, which if you're familiar with his work, has all the traits you'd expect. Interestingly the story has been adapted before in the 1965 British horror film Die Monster Die which set the story in Cornwall (it's worth checking out if you can find it nowadays). Here British director Richard Stanley has added some interesting modern day aspects including a homage to John Carpenter's 1982 film The Thing. This is well worth checking out especially as it's Cage at his best.

Remake of 'The Thing" with a little bit of 'The Blob' thrown in for good measure! - Color Out of Space review by CS

This is supposed to be based upon a story by H.P Lovecraft, but to me it felt more like the storyline had simply been pinched from John Carpenters 'The Thing', and transferred from the Arctic to some forest in America, with a little bit of 'The Blob' thrown in for good measure! There is no explanation as to what 'The Colour from Space' actually is and whilst it tries very hard to come across as deep and meaningful, it really is complete drivel! I also felt like I was watching a Stephen King film, and it kept reminding me of so many other King films, which also tend to offer very little in the way of explanation or depth! This film has nothing new or special to offer and whilst it's ok, it really is more of a Horror movie than a Sci-Fi film. Nicholas Cage hasn't been in a decent film for years and literally sleepwalks his way through this one, falling back on his usual manic acting. It really annoys me in Horror movies when the characters do stupid and illogical things and neither the script writer, director or producers can bother to find a more interesting and credible way to present the storyline. Even the ending had been done so many times before! In the end I found this quite a bore to watch and wondered why they had even bothered?

Scary as hell! - Color Out of Space review by HM

SF horror. A family living on an Alpaca farm find a meteor on their fields. Odd things start to happen. Cage is his usual self at full blast. A creepy and at times sick horror movie. One for the shock fans. I certainly found it gripping even though I am not a horror genre fan.

Dire - Color Out of Space review by KB

The effects are decent but the film is terrible.Towards the end we started to find it a bit amusing although it is not meant to be .The script is lame