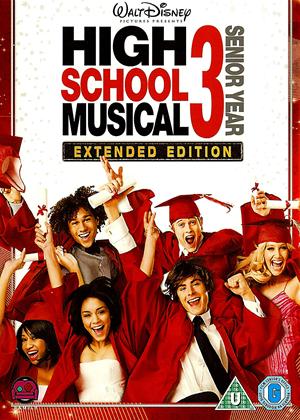 The thing about the High School Musical franchise is that you either love it or hate it. Ever since the first movie, it has always been like that. I, for one, will now be standing in the middle because I will review this film unbiasedly. I've to say, the movie was fun to watch. It has a very simple storyline, which was made complicated later on in the movie. The characters whom are now in their senior years has to choose where they have to go after they finished high school. This is the story about their hope and fears and choices they have to make. Simple enough...

What amazes me is the dance numbers which had me completely blown away. It was choreographed so sophisticatedly and so beautifully that it will leave the audience enthralled. From a simple waltz during the rooftop scene to a very complicated-sorta-breakdance in the junkyard scene. I give my applause to the choreographers and the dancers. Well done!

The songs, I've to say, are good and most are very catchy and fun to listen to. The lyrics have matured. They are mostly better than the songs from High School Musical and its sequel High School Musical 2. The lead singer of each songs sings the song greatly. My compliment to Efron for his rough and edgy voice and Grabeel for some nice and melodic pitch. Although I'm not quite fond with Hudgen's nasal high-pitch voice.

One thing that I'm not happy with this movie is the fact that most of the musical numbers and songs are performance scene. Whether they're rehearsing the play or the play itself. In a true musical the dancing and singing are the way the characters express their feeling or just a way they talk. It is apart of the story, the dialogue. But in HSM, some of it are performance scene. For example, the prom scene is actually the rehearsal of the actual play. This slightly takes away the musical feel to it.

A bit of a warning though. This movie is made FOR THE FANS ONLY. If you're not a fan, you might want to start with the first HSM and work it up or just stay away from the franchise. Because, if you're not a fan, you might find some of the scenes quite cheesy. From some of the dialogues, to the ending where the camera focuses on the characters' faces before the big red curtain closed, even the last song (entitled "High School Musical") during the graduation is slightly cheesy.

Other than that, I'd say it is a great movie for all ages, especially the young ones. And it is a great family movie if you want some times to relax from the rough actions and romance or even politics of Hollywood.

The songs and the dance moves will keep you glued to the screen.

For the teens High School Musical is a must see and in this instalment we're at the end of the senior years. The film maintains the slick American dream, complete with high-pitched songs and sickly sweet story lines. No chances are taken and the fans get what they want. Originally High School Musical was envisaged as a television film, it still warrants this tag. It seems ideally placed for the late afternoon slot on the Disney channel. Yet as a teen musical it is hard to beat.