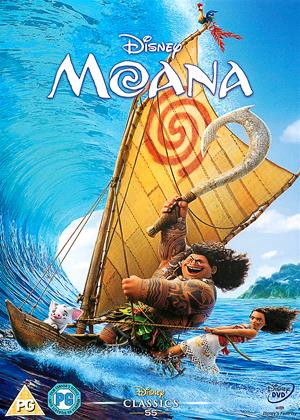 Some childrens films have more thought given to them than so called adults. Lots of moral values inter twined, which is no bad thing. Fair bit of novel thinking gone into it. Kids love it, yet is intelligent enough for parents to watch along as well.

An unexpected roller coaster of a ride!! - Moana review by HB

I took 22 young people aged between 10 and 15 to see this film on a youth club trip but had very low expectations of it. I was expecting something like last years Frozen but I couldn't have been more wrong. There is no love story in it and I was glad to see Disney had not been tempted to squeeze one in. It has a gentle beginning before it suddenly turns into an action adventure with breathtaking cinematography, a very witty script and an excellent storyline. I won't give anything away but I did like the relationship between the ocean and the lead character and I feel there are parts that are dark so not suitable for children under 7. The music and songs are slipped in naturally and fit in well with the mood of the film. This could become a Disney Classic on a par with Beauty and The Beast et al.

A very colourful film with a simple storyline that hasn't been overcomplicated and doesn't contain the usual love story or music riddled interludes that have been the case of late (I.e. Frozen). An average film overall but the colours and setting make it a worthwhile watch.

Veteran Disney directors Ron Clements and John Musker have a knack for crafting memorable animated musicals (The Little Mermaid, Aladdin) that bore into your ear with catchy tunes. Moana is no exception, especially with the addition of Lin-Manuel Miranda writing some of the songs. Here is a story with epic fantasy, lovable characters, brilliant animation design and music that is beyond memorable. As much as I tried, I just couldn’t get the melody of Dwayne Johnson’s “You’re Welcome” out of my head.

Voiced by newcomer Auli’i Cravalho, the titular hero of Moana is the curious and adventurous sixteen-year-old daughter of the village chief. Her dad wants her to take over the tribe when she grows up, but she’s far more interested in exploring the seas, an activity that is considered taboo among the tribe. But sailing the seas may be the only way to save her tribe in which a terrible curse has befallen the island. With a small wooden raft and her inept chicken pet by her side, she sets off on the rough waters to prove herself as the hero of her people with little more than the wind and the magical force of the ocean.

Her mission is to return a mystical gem back to the heart of a goddess. This is not an easy task, especially with giant lava monsters and an armada of tiny coconut people. The demigod Maui (Dwayne Johnson) provides some of the muscle and expertise as an egotisical and reluctant warrior. With his many journeys tatooed on his body, he’s less interested in Moana’s quest and more concerned with reacquiring his magical fishhook that can transform him into any animal. It’s a little rusty, though, as it sometimes can only muster half a shark body. They have plenty of false starts, but eventually learn to work together, mostly because the ocean itself is a character that won’t allow them to be separated much.

The adventure is filled with several memorable moments of wondrous danger. The most visually engaging and catchy of these scenes is with the villainous Tamatoa (Jermaine Clement), a giant grab that delights in collecting shiny treasures and eating people. Before he decides to eat Moana, he delights her with a song, complete with disco lighting and glow-in-the-dark features that makes him such a memorable and deliciously evil character. He doesn’t have much competition, however, as the other obstacles are mostly mute, relying more on genuine presence than melodies.

The script is equal parts classic Disney fantasy and subversion of Disney expectations. For any parent well-versed in Disney animation, there’s plenty of in-jokes to admire, such as when Tamatoa complains that people would be more likely to help him if he was a crab with a Jamaican accent. That being said, they still adhere to most of the familiar Disney tropes. Moana’s pet pig, for instance, serves no purpose other than to be a bookend mascot and another cute plush toy for the kids. Moana’s grandmother serves as a sagely spiritual guide, but she at least has enough manic smarts before she becomes little more than an emotional tether.

But it’s the music that ultimately elevates Moana as the strongest of Disney’s new age of CGI musicals. This is the first attempt at a computer-animated feature by Clements and Musker and they do not disappoint. Every single song is catchy and the direction of each number is dazzling and distinct as much as any Disney musical in the past. If this truly is the new age Disney musicals, who better to helm it than the men who helped spawned Disney Renaissance of the late 20th century? The brilliant combination of snappy direction, beautiful animation, stellar voice work and grand musical numbers make Moana one of the CGI studio’s strongest efforts to date. Does it stand up as a Disney classic? It very well may be and I hope it stands the test of time.