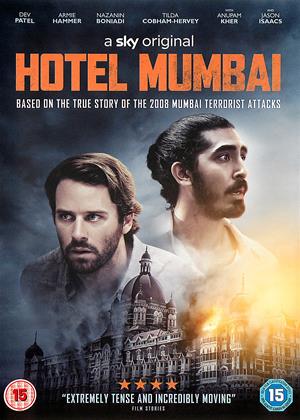 I'd read about the military aspect of this event but was unaware of the 'people' side. As such i cant say how true all this is, but i get the impression due to the apparent complete lack of over/unrealistic drama they have tried to keep it accurate.

Firstly the filming, acting, script are all fantastic.

And while there isnt much to make a film of - it was a slaughter - it remains captivating and plays right down the middle keeping true to its story and not deviating with hip western issues being thrown in randomly to send a message or try to spice it up.

In the first part of the film the hotels moto is mentioned 'the customer is god' which is great for a place proud of its service.

but the moto is repeated later and its incredibly sad to think these people still thought it applied while they were being shot at. Its very brave but really, just run away! At that point its really up to the states security services to fix the problem. Which of course is another aspect to this story.

Its a well done film and worth a watch, but more than anything its worth watching to appreciate the sacrifice and bravery of the staff.

And how a countries military focus left a huge city totally unprotected....

This is a masterpiece of filming, acting and edge of the seat viewing. It is based on a true story of terrorism in India. Great film- dont miss it.

A harrowing and graphic account of the events of the Mumbai terror attacks in 2008 centred at the Taj Hotel. Well made and gripping throughout and without the Hollywood schmalz. Highly recommended

Was living in Singapore at the time and people visiting the hotel for a conference died! - Hotel Mumbai review by AA

Interesting film highlighting the tragedy of the raid on the Hotel Oberoi and the shock waves it sent around the world at the time.  I had to travel to Tokyo and Hong Kong shortly after and  security in the hotels I stayed in was very tight compared to previous visits such was the impact of the attack.  Not a film for the faint-hearted!

I am not usually squeamish, but this film had so many violent and brutal scenes. If you do not like watching people getting slaughtered, do not rent this one. I am not saying it's not a well made or important movie, but be aware that it is definitely not for some people.

I remember hearing about the appalling violent attacks in Mumbai back in 2008, but knew very little about what actually happened.

So this film, based on the true facts sets out to inform us of how a small group of heavily armed muslims, who have been brainwashed by an unseen leader, or religious nut if you prefer, descend on Mumbai and cause mayhem, death and destruction.

It is well acted, with often very violent scenes of hundereds of people who are shot at random in the name of Allah, many were killed and loads more seriously injured. The local police, who were woefully inadequate in dealing with such a terrorist attack, had to wait hours for an armed response unit to arrive from New Delhi. In the meantime the staff at the hotel do their best to hide and protect their guests, this reminded me of the equally harrowing 2004 film Hotel Rwanda. These attrocities still happen around the world, as and when the Jihads decide to attack.

It would be wrong to say I enjoyed the film, how could you, but it brings out all sorts of emotions, and it highlights another dreadful chapter in human history. I recommend it to all who can stomach the dreadful scenes, it's definitely not for the faint hearted.

On one level, this has all the trappings of a conventional disaster movie: disparate group of characters trapped in a horrific situation while all hell rains down on them, but, because this is based on real events in which real people died, if this were all it was, it would be open to the charge of being exploitative. It goes much further, however. It resists the temptation to make the appallingly cold-blooded, but essentially poor, young, brainwashed jihadists simply cut-out villains . It also gives full recognition to the incredible courage and heroism of the hotel staff, which, for me, was the point of the film, and I'm surprised that Mr. McCormack didn't acknowledge it in his review. In fact, I found that I was much more concerned for the fate of the staff than of the guests, and, given the casting of Dev Patel, I'm not sure that wasn't the director's intention. Thus, the delicate balance: as a disaster movie, it works brilliantly, a real emotional white-knuckle ride, but, in giving both jihadists and hotel staff equal importance to the guests, who would have been the main focus in a simple thriller, the film becomes something more thoughtful and important.

The terrible true story of a terrorist attack on a hotel in India. Characters are brought alive to the viewer but suffer slaughter and terror. Hard to watch as it feels like walking amongst the wounded and dead at the scene of a bombing. You can't stay aloof as a mere spectator, it feels as if you are there and may have sickened some viewers. The cold blooded terrorists demonstrate a total commitment to their religion and cause, taking instructions from a faceless and ruthless leader. All are targeted, men, women, children and the old. No mercy for us infidels.

I was riveted to the screen and felt as though I had been through an emotional wringer! Tough entertainment, but brilliantly done.

Based on true events, Hotel Mumbai is a film so blunt and uncomfortable that I dare say its ultimate meaning becomes lost in a sea of grit and bullets. The film documents the horrific events of a 2008 assault on a hotel in Mumbai, where Islamic terrorists invaded with automatic weapons and grenades, aiming to make their voices heard. The result is a film that teeters between being as raw for the same eyes as United 93 and as uncomfortably anger-inducing as London Has Fallen.

Similar to the construction of United 93, we’re introduced to a slew of average people who will just happen to be in the wrong place at the wrong time. We meet a tourist couple, a couple with a baby, a butler with a baby, and a hotshot elite. All of them converge at the hotel and we watch as some have the opportunity to the night off either work or staying in to stay behind. On this fateful day, however, a band of young Islamist terrorists stroll into towns and begin their massacre. Under orders from their unseen mastermind, they kill as many people as they can in the name of Allah, doing so coldly. They slip into the hotel and violence breaks out as the inhabitants scurry to find a way out.

While the film never goes into a Die Hard mode of trying to better wrap around the flawed ideology of the terrorists, thus instigating unhealthy views of an entire people, I must admit I appreciated the film making the attempt to make the villains both cold and human at the same time. This comes as a bit of a surprise as we only know them for most of the film as soldiers for Allah, adhering to orders with religious peppering and never questioning them. Then, as almost as if by mercy to shake things up, we learn that one of the terrorists, wounded, has lied to his father about what he is doing. Though the young terrorist believes in his actions, he has doubts that come forth in an emotional breakdown. He breaks down even further when one of the hostages prays in front of him and he can’t bring himself to kill her. After all, she believes the same thing he does. How can he reason doing to the right thing in his name of religion?

Though that scene is certainly the highlight, it comes sandwiched between a gritty, brutal, and anger-inducing experience of terrorists. An aloof reasoning might lead one to believe the film is merely a thrill experience, seemingly so with the cowering survivors including a noble father, terrified woman with a baby, a racist grandma, and a cocky hotshot who loudly orders prostitutes in the restaurant. But keep in mind these are true events. What message should we take away from such a film? Mere awareness would be better suited for a documentary. While there is certainly more humanity that could be extracted, what does this say about violence? What does it say it about religious violence? What does it say about India?

Hotel Mumbai becomes such a draining experience that by the end of the picture I felt sick in more ways than one. Not merely for how cruel such an event was but how little else can be said about it in such a picture. The epilogue of real footages comes so bittersweet that the only thing I felt most thankful for besides life is that Michael Bay didn’t direct such a picture. You just know that religious and racial angle would’ve been amped up to blindsided bloodlust had a more action-oriented and redblooded dude been at he helm. This film thankfully never becomes that kind of patriotic puke but it doesn’t give much reason to exist as it is already.