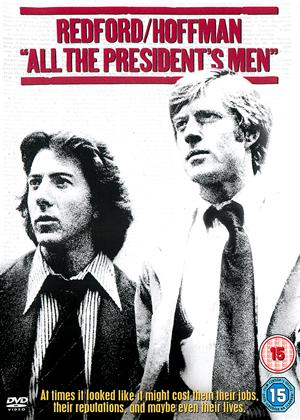 Reviews (4) of All the President's Men

Still brilliant - All the President's Men review by JD

Redford and Hoffman are at the top of their game. The determined effort of these two to trick tight prise information out of the committees of the Whitehouse leaves a feeling of frustrated admiration. It is utterly immersing. There have been so many imitators since that you forget how brilliant it was.

Interesting to re-watch - All the President's Men review by EB

I saw this in the 1970s and with rather indifferent sound in the cinema struggled to follow some of the dialogue. Enjoyed revisiting it. It's a very tight focussed narrative. Some current parallels!

This film was a real disappointment to me - I thought Spotlight and the Post were excellent movies but this one really not.

I do appreciate it is an older movie and therefore the inspiration for subsequent Journalist movies such as the above, but still...

The movie seemed to have no structure. Essentially it appeared to consist of a repetition of the following :

1) Redford and Hoffman typing furiously then walking unreasonably quickly across their office to avoid missing the daily deadline (would it really have mattered if each of their stories had appeared in the next day's paper?)

2) Redford and Hoffman Turning up at people's houses/offices to ask them questions. Initially each person is reluctant to talk. Then with minimal cajoling, then talk at length.

Despite this the protagonists make painfully slow progress until eventually the 'mystery' is resolved by Redford who visits a random stranger in a car park for the third time. The stranger, presumably as fed up as the rest of us that the movie is now 2 hours old and no sign of a conclusion, basically tells Redford the solution.

It seems a shame that the stranger didn't just say this to Redford towards the beginning and the film could have been 30 minutes long.

No film is without positives in my opinion and Jason Robards is just great.

This is one of the great conspiracy thrillers and exposé stories of the 70s and made more impactive in that it's based on true events, the story of the Watergate scandal that brought down the President, Richard Nixon. More recent and similar films such as Spotlight (2015), The Post (2017) and Bombshell (2019) have all been strongly influenced by this and the style in which the story is told exudes authenticity making it all the more interesting and watchable. Robert Redford plays Bob Woodward, a relatively inexperienced reporter on the Washington Post newspaper, who is covering a small story of a group of men arrested for burgling the Democratic Party offices. He becomes suspicious when some top government lawyers have been brought in to defend the men and this leads to the uncovering of a major conspiracy that goes right to the heart and the top of the Republican Party and the US Government. Dustin Hoffman plays Carl Bernstein, another reporter who works with Woodward to uncover the story. The cast are fantastic and include the great Jason Robards as editor Ben Bradlee (played by Tom Hanks in The Post) and Hal Holbrook who is the mysterious informer codenamed Deep Throat. It's a great story and a significant one too. The recreation of the busy newsroom and the difficult task of getting people to talk after they've all been threatened adds to the feel of the film as a suspense thriller. The story is a complex one and you have to stay focused but this is a major film of the 1970s and one that is worth seeking out if you've never seen it.