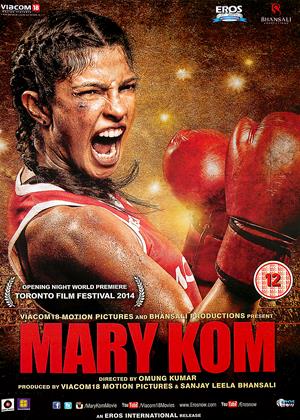 Synopsis:
Queen of the Indian boxing ring. The winner of five World Championships and an Olympic Bronze. Born to parents who were landless agricultural labour in the state of Manipur in Northeast India, Mary's story is one of relentless struggle and unflagging passion for the sport of boxing. A childhood of hard labour prepared her body for the sport just as well as any fitness training might have. Her own will and aggression carried her through the minefield of politics that any sport in India is. Nimble of foot and pulling no punches, the boxing ring was Mary s dominion.
We tell her story no holds barred - her tough childhood, her rebellious character and of course, how she held her own in the male dominated world. It s all packed into this inspiring, exhilarating tale of a woman who faced impossible odds in a man s world and won.
Actors:
Priyanka Chopra, Zachary Coffin, Darshan Kumaar, Darshan Kumar, Lin Laishram, Shishir Sharma, Bijou Thaangjam, Sunil Thapa
Directors:
Omung Kumar
Producers:
Sanjay Leela Bhansali
Writers:
Saiwyn Qadras, Ramendra Vasishth, Karan Singh Rathore
Studio:
Eros Entertainment
Genres:
Bollywood, Drama, Sports & Sport Films
Countries:
India, Bollywood, Drama, Sports & Sport Films

The obvious question is why didn't they choose Mary to portray herself ? She's the same age as Priyanka & can play herself more convincingly. She's also the prettiest boxer I've ever seen & was already in physical shape for the role. She can speak Hindi, albeit not perfectly. Why then did they pick a Yankee glamour girl star & make her look dowdy ? Perhaps they don't like to acknowledge the success for India of someone from a border state, who looks Burmese.

Despite this, Priyanka shows Mary's conviction & aggression surprisingly well, considering her pampered life as former Miss World. In Rocky style, it's gritty true life story is inspiring girls all over India to learn self defence & stay healthy. The real Mary is actively promoting this with her female boxing academy & press appearances. She's also very skilled in grappling & kicking, as well as her local Manipur martial with swords. After watching this great movie, you may find the real Mary more interesting. Whether or not you agree with feminism, you will probably agree that an overhaul of the gender inequality is needed in India.

In fact, there's no reason why women's combat sports can't be as popular as men's. You as the paying audience can dictate.