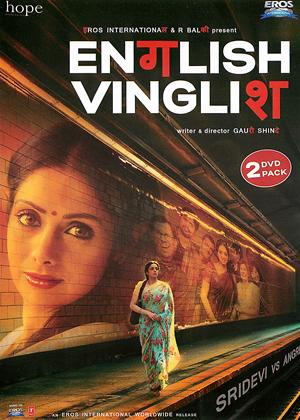 Synopsis:
Money, fame and the ability to speak English. In India, these 3 factors play a huge role in how society judges an individual. 'English Vinglish' is the story of a woman who does not know English and is made to feel insecure by her family and society at large. The film is a light-hearted yet touching and transformational journey of Shashi. Circumstances make her determined to overcome this insecurity, master the language, teach the world a lesson on the way to becoming a self assured and confident woman. The film is shot mostly in New York and captures the inherent struggle of many people all over the world with the English language.
Actors:
Sridevi, Adil Hussain, Mehdi Nebbou, Priya Anand, Sulabha Deshpande, Sujatha Kumar, Navika Kotia, Shivansh Kotia, Cory Hibbs, Rajeev Ravindranathan, Maria Romano, Sumeet Vyas, Ruth Aguilar, Ross Nathan, Damian Thompson
Directors:
Gauri Shinde
Producers:
Sunil Lulla, Rakesh Jhunjhunwala, R. Damani, R. Balki
Writers:
Gauri Shinde
Aka:
Aangilam Vaangilam
Studio:
Eros Entertainment
Genres:
Bollywood
Countries:
India, Bollywood

Not exactly an epic, but a warm-hearted yarn promoting that the whole world should speak English. You may disagree, but whatever, it's just run-of the mill entertainment for a rainy afternoon.

I usually hate Bollywood movies, but this is at least watchable - unfortunately they add some of those awful song and dance numbers towards the end for the Indian audience (fastforward through that nonsense and you won't miss anything).

This is a fairytale of an Indian woman going to the USA for a wedding and being nervous because she can't speak English (which is utterly absurd anyway: all light-skinned Middle-class professional Indians speak English; it's their dark-skinned untouchable poverty-stricken servants who do not!)

Anyway, she attends an English class. The teacher is a queeny flamboyant gay American (this is how Indians see white American New York men); a French classmate is a chef who falls passionately in love with this pretty Indian woman; other classmates include the lech Pakistani taxi driver, the overweight Mexican woman, the Sri Lankan software geek, the Japanese quiet girl, and the withdrawn and unfriendly African. It's a good job there weren't any Germans in this class of stereotypes or they'd be wearing jack boots and raisin their right arms in the air in Hitler salutes!

So many silly coincidences in this flight of fancy fairytale too - but as a piece of whimsy to watch as a feelgood movie (all Bollywood movies are feelgood fluff really)it'll pass the time.

Some funky music on the soundtrack and some modern attitudes to gays make this a very modern Indian movie indeed. But the stereotypes of white Westerners is, frankly, just racist - a bit like if a British movie had an Indian characters saying 'oh goodness gracious me' all the time and eating curry sandwiches...

Anyway, 3 stars. Watchable Bollywood nonsense, if you like that sort of thing.