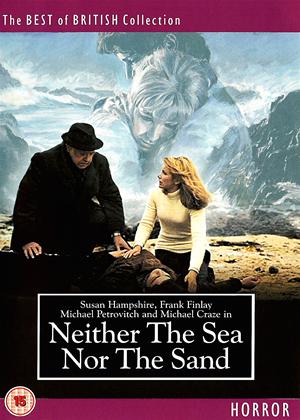 Synopsis:
Anna arrives in Jersey, determined to escape her personal troubles, and meets Hugh. Hugh has a tremendous affinity with the sea and as he shows Anna round the island they begin to fall in love. Hugh persuades Anna not to return to her husband and they go to the old house that Hugh shares with his brother, George. George resents the intrusion of a woman and the brothers fall out when he discovers them in bed. They flee to a remote part of Scotland and life is bliss until one day Hugh is found dead on the beach. Anna however believes that their love can overcome death. One morning, Anna is proved right...
Actors:
Susan Hampshire, Frank Finlay, Michael Petrovitch, Michael Craze, Jack Lambert, Betty Duncan, David Garth, Anthony Booth
Directors:
Fred Burnley
Studio:
Odeon
Genres:
British Films, Classics, Horror
Countries:
UK

Rent other films like Neither the Sea Nor the Sand

Reviews (1) of Neither the Sea Nor the Sand

Spoilers follow ... - Neither the Sea Nor the Sand review by NP

Based on a book by former newsreader and housewives’ favourite Gordon Honeycombe, this offering from Tigon films introduces us to Anna (the wonderful Susan Hampshire) who is enjoying a somewhat stilted conversation with new friend Hugh (Michael Petrovitch) whilst strolling through the picturesque Isle of Jersey. Anna’s very vocal about her failing marriage and, what with the sea, sand and shivering, a closeness inevitably occurs between them. It’s difficult to believe the two should become so attracted so quickly and deeply, particularly as Hampshire invests Anna with an appealing forlorn quality, a need to be needed, and Petrovitch’s lines are clipped out staccato fashion, without any great emotion.

Even Hugh’s prissy, repressed brother George, played with great archness by Frank Finlay fails to quell their enthusiasm for each other – and so with lines like, ‘I want to be with you always’, it’s cruelly inevitable that tragedy is looming. And so Hugh dies on the beach from an instantly fatal heart attack, leaving Anna bereft.

And yet one dark night, Hugh comes back to her, dead yet alive. George says ‘he’s possessed by you, it’s revolting,’ in typically warm-hearted fashion. Such a premise is interesting but seems to be directed by someone with no real interest in the macabre, despite George’s doom-laden prophecies. As Hugh, now somnambulistic and communicating telepathically (via a voice-over) begins to decay, it’s pretty clear there’s to be no happy ending for the two besotted souls.

1960’s Doctor Who companion actor Michael Craze has the thankless role of Collie, forever trying to attract Anna’s attention. Despite having the advantage of not being dead, Collie is reduced to playing a very distant second fiddle to Anna’s black-eyed soulmate (although his deterioration seems to have reversed itself towards the film’s climactic scenes by the sea-front).

Susan Hampshire makes the most of Anna, and allows her a certain dignity (despite having a nude stand-in for the fairly mechanical sex scenes). This is a mournful, haunted story of doomed love, full of lost looks amidst charming yet windswept locations. It could have been more effective if the horror element had been further embraced – not just as a horror film, but a more engaging project all round given that the plot is somewhat thinly spread. Director Fred Burnley made the decision to play down the horror aspect, and of course that is a perfectly reasonable artistic choice – his resultant picture is slow-moving yet effective. Despite having its title changed from ‘Neither the Sea nor the Sand’ to ‘The Exorcism of Hugh’, the film didn’t attract any huge attention upon its release.