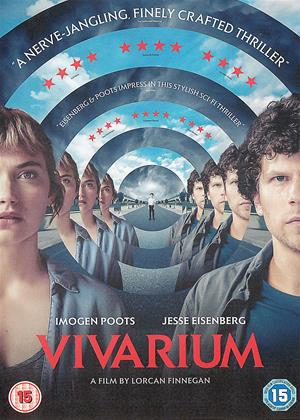 Rather disappointing viewing in the end. The premise is an intriguing one, with young couple Tom and Gemma (Jesse Eisenberg and Imogen Poots) being imprisoned in suburban hellhole 'Yonder' with its identical Monopoly-houses and superficial perfection, and forced to raise a child (the admirably creepy Senan Jennings). Unfortunately however, the film's script simply isn't strong enough to sustain it, and the film, as with the couple, quickly ends up going nowhere, whilst most scenes are too brisk and un-nuanced to flesh out Yonder’s ostensibly forbidding world of plastic, consumer-friendly domesticity. Occasionally the one-dimensional nature of the characters is challenged, as with a suggestion of Gemma's maternal instinct counteracting Tom's ever more menacing frustration, but the film shies away from any depth or difficulty, with the result that the presumed intention of giving us a Kafka-style nightmare falls rather flat, sadly.

A young couple are stuck in a suburban nightmare. They’ve been lured onto a deserted, labyrinthine housing estate that has no way out. You probably know more than that anyway from the Cinema Paradiso blurb. (Do avoid the trailer and the CP 'critic review’ below – they’re even more tell-tale.) The less you know the better as it will keep you watching to find out what the heck is going on. It’s sci-fi on a small scale. It ultimately makes no sense and it could do with more incident along the way, but there are some unsettling moments and the journey will keep you watching.

Suburban hell with a problem ‘child’ thats not yours, and no escape. This pressed all my buttons- horrifying. This was the most troubled I have been watching a film for years.

Trapped in the suburbs with a mortgage and screaming kids? This is the film for you.

Creepy, bizarre, unsettling, not exactly laugh a minute but some black humour mixed in with the scary stuff....

A film that stays in your mind....

What more can i say! Lame plot that went nowhere. No real story line. A waste of 2 hours that I won't get back. Choose something else.

Go into a viewing of Vivarium with as little prior knowledge as possible. I won't spoil the plot of this interesting and gripping existential horror film. Good performances boost the surreal and off-kilter elements to this very strange film that is an allegory for the perils of suburban lives and the aspirational drives and conventions placed upon most of us these days. It's also pretty chilling and rewarding for those with a soupcon of patience. This plays like a feature-length episode of Black Mirror or the Twilight Zone, and doesn't suffer from those comparisons. Imogen Poots, Jesse Eisenberg, and Jonathan Aris (in particular) as the three principles all embody their weird roles with perfection.

A bizarre and fascinating horror film that challenges the modern attraction of suburbia and modern living. Gemma (Imogen Poots) and Tom (Jesse Eisenberg) are a young couple looking for their first starter home and wander into an estate agents where the weird agent recommends a new development called Yonder. When they visit they soon find themselves trapped in a labyrinth of identical houses but with no way out. The arrival of a baby in a box with instructions to raise the child and be released starts the two off on a frightening experience as the rapidly growing yet emotionless child pushes them to their limits. There's a subtle link here to the the Village Of The Damned (1960) and one could read this as a black comedy but it's too disturbing, in my view, to induce anything other than surreal terror. The film has some interesting twists but ultimately remains enigmatic and in that sense slightly unfulfilling. Two strong lead performances and a an interesting visual look make this worth a watch.

Disappointed by this pseudo-intellectual movie. Could finish within 20 min to save your time as it could be easily compressed in this time limit with out any loss - it would be still crap.

This film reminded me of old Twilight Zone episodes, and they probably inspired it.

It also reminded me of Norwegian movie The Bothersome Man, also about a parallel reality where everything is odd and strange. Vivarium is a Danish/Belgium production, I believe. Also reminds me of some Hammer horror films where people cannot escape the area where a big haunted house has trapped them - early 70s. And also other circular films like Looper and more.

I dislike films which suddenly flip into fantasyland esp when no explanation is given, as here. Trying too hard to be profound, but really gimmicky.

On the plus side, the child actor playing the boy is superb. I was much less convinced by the adult version and the estate agents. Why the couple would not notice the weird set up is very unrealistic - so that meant I could not suspend disbelief. People just would not behave like that.

Much of this is all style and no substance - makes no sense really. Overlong at 2 hours and the last part loses any suspense built up - and predictable too, for me.

If there’s any singular element that has protruded more into the new rise of social thrillers, it would be bluntness. With the revival of The Twilight Zone once more pounding allegory hard into the media once more, several films and TV series have been less shy about what they’re trying to say. Vivarium fits that criteria, practically a Twilight Zone episode with the way it is staged. There’s no doubt that this film is trying to make a bold statement on the nihilistic nature of suburban dysfunction. Well, unless you put the film on mute and just accept its premise as weird for the sake of weird. You can if you want, but you’ll get far less out of the film.

The film concerns a young couple that are seeking to settle down in a suburban neighborhood. The couple of Genna (Imogen Poots) and Tom (Jesse Eisenberg) visit Yonder, a suburb where every home literally looks the same, making it a difficult place to navigate with no discerning characteristics. It’s a very creepy place considering how uncomfortably silent the neighborhood is. More creepy stuff happens when their relator vanishes during a showing and Genna and Tom are unsure how to leave Yonder. With nowhere to go with their car out of gas, they settle into the house labeled only as #9.

Of course, they find escape is impossible. No matter how far they drive, no matter how far they try to seek civilization outside the suburbs, they are trapped with no way out. They are given instructions, however, on how they can leave. Left with an infant, they receive a note: “Raise the child and be released.” Though it seems like a lifetime sentence, the couple are astounded at how fast the child grows, accelerating from seven months to seven years in record time. Or is time slipping away from the couple as their mental state goes downhill fast when trapped in such an environment?

Vivarium only grows blunter as the farce continues. Tom at one point finds that the soil of Yonder is artificial and that there may be something beneath the surface, leading to him digging a deep, deep hole. The metaphors in that very sentence should be most obvious in what the film is trying to say about the nature of existentialism when lodged within the suburban setting that traps the soul. Physically and mentally, Tom and Gemma grow distant, angry, and violent as they wither a slow death, their boy only growing smarter, stronger and all the more mysterious. It quickly becomes clear the release referred to in the note is not what the couple thinks it is.

Though Vivarium operates on a commentary most blunt, there’s an added dose of intrigue for the year of its conception. Though produced before the Covid-19 pandemic, it rings a bit more true for the new family trapped at home, unable to escape and growing weaker by the day in all aspects. Of course, Vivarium’s more apparent them is that of the circular logic in a dull life of comfort that is anything but comforting for the entrapment placed upon the unassuming. There’s an added dose of the cruelty of nature, also delivered with a boldness that creates unease as well, but it all essentially gravitates back towards the darkness lurking under the surface of suburban living. Though it spoonfeeds the audience this messaging, I think we’re living in times where he deserve media that cannot be misinterpreted. Vivarium is very direct and quite refreshing in that regard.