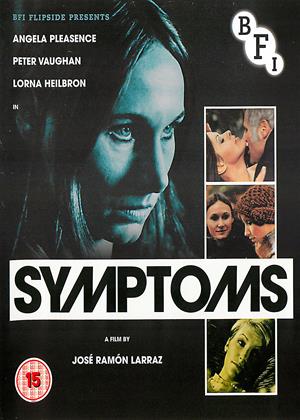 This film relies very much upon its tiny cast, so the importance of its casting cannot be underestimated. Spanish Director José Ramón Larraz, the often volatile personality who went on to direct cult classic ‘Vampyres’ the same year, selected an ensemble that could hardly have been bettered.

Considered a lost film since its last showing on television in 1983, this carefully paced, deeply atmospheric tale is only beginning to find a new level of appreciation since its rediscovery. Peter Vaughn, often cast as ‘heavies’ at the time is quietly menacing as Brady, the ‘odd job man. Lorna Leilbron, who was so good in ‘The Creeping Flesh’ plays Anne, eminently sensible and unflappable. And, providing her usual extraordinary performance, Angel Pleasance plays Helen, who lives in her huge inherited estate in the middle of secluded English countryside, convalescing from some undisclosed breakdown and yet still clearly suffering. Whilst not quite as other-worldly as she was in ‘From Beyond the Grave’ earlier in the year, her more subtle playing of quiet madness reveals itself as the story plays on.

The direction is sedate and restrained by Larraz’s standards, yet drenched in doomy, sinister atmosphere. Even a scene as seemingly innocent as Helen sitting alone in the spacious living room, darkened by the heavy clouds outside, the windows buffeted by the storm, is oppressive and unnerving.

The storyline is thin and it comes as a huge non-surprise to find the deranged killer on Anne and other sundry characters is Helen. And yet the fact that Brady is too obviously a red herring (although hardly unimpeachable) doesn’t disappoint because Pleasance plays it so fascinatingly well.

You Might Very Well Be Shocked. - Symptoms review by Cato

Apparently this film was "found" quite recently after having been lost some decades before. It's a mysterious offering, and if you find the actresses rather demure to begin with, by the end you will certainly be shocked, as there is plenty of spine tingling on the way. Angela Pleasence is the most unlikely of the characters to have been a suspect, but watch and you will certainly be surprised. Often the way in "whodunnit"s, but this is a clever film, and I wasn't surprised that the director was Spanish, as that country has a history of rather sadistic stories on the cinema front. Not to be sneezed at though. Peter Vaughan is the man of mystery lurking around in the grounds of the very scary house, with it's threatening trees surrounding a somewhat forbidding lake. The film is reminiscent of Polanski's "Repulsion", and some think it may even be an improvement on that classic psychological thriller. You have been warned.