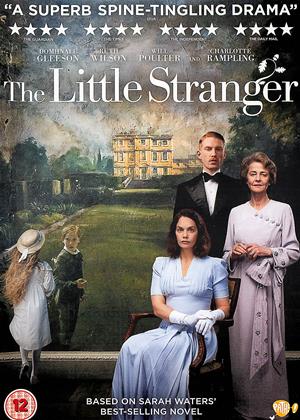 Reviews (6) of The Little Stranger

Really not very good - The Little Stranger review by RB

Assuming that you rented this film because you were completely swept away by the book - prepare yourself for a major disappointment. There is none of the long, slow, agonising build-up of tension here that the book creates and which the story demands. Major incidents are either missed out completely or skimped horribly, even though the film is practically perfectly cast - you sit there thinking what a good film it might have been had a better scriptwriter been employed on the project. It looks wonderful too - the gloomy, slowly rotting Hundreds Hall is visually perfect. But the script is pedestrian at best and dire at worst. A major disappointment.

What a bore - The Little Stranger review by mK

This film is set in an atmospheric mansion and the acting is good, although the whole period stiff upper lip, dont say what you think bit is tiresome. In fact the whole film is a bit of a plodding bore. It’s labeled a thriller, but there are no thrills and the surprise ending is a yawn.

Slow and inconsequential - The Little Stranger review by JL

Drags on for an hour or so setting the scene, finally turns a little atmospheric then fizzles out with a nothing of an ending. Waste of a few hours.

I really enjoyed this film (except the fizzled out ending - no spoilers) and have always liked ghost stories like this.

One major criticism is the main character using the word 'snuck' as the past of 'sneak'. That is a recent American import - the last 20-30 years - and would NOT have been used in the late 1940s, in provincial England. 'Sneaked' is what the character should have said. I do wish authors/screenwriters would be more careful to get language right and correct!

But this is a really enjoyable haunted house ghost story overall - with added tension of madness and murder, the first world war and the decline of the aristocracy and landed gentry.

So 4 stars. But oh what a shame about that ending!

Verg slow plot, not much happening in boring post war 1940s britain. Trailer must have looked good otherwise can't think why I rented it. Not a thriller!!!!!

A not very thrilling thriller - The Little Stranger review by DH

A slow-paced, not very thrilling thriller. Ruth Wilson again demonstrates what a fine actress she is. Average fare.

The Little Stranger is that kinda middle-of-the-road thriller that tries to walk an aloof line between stirring period-piece drama and standard haunted house spookiness. If it only had the extra bit of oomph, that’s added dose of terror, or even just a better shot blitz of period horror, there may have been something here. As it stands, however, this picture requires an extra cup of coffee to even progress.

The story takes place in the 1940s of Warwickshire, a doctor is making a housecall to the aged and dusty Hundreds Hall estate. Doctor Faraday (Domhnall Gleason) is rightfully suspicious of such an place in such decay, having housed two centuries of the Ayres family. He has been to this place before and has much different memories of it before the place descended into disrepair. Roderick Ayres (Will Poulter), a wounded World War II veteran, now owns the place with his family. Faraday suspects something is up with the family when he is called upon to attend to a sick maid who is faking her illness in hopes of getting out of the house.

Something strange does seem to be lurking about in the house as strange noises and servant bells around the halls begin to ring with nobody on the other end. Is there something lurking in the darkness? And if there is, is it of this world or a spirit from beyond, haunting this house? Something is abound as the more time Faraday spends in this house, the more mysterious and murderous it appears.

To call the film a slow-burn would be an understatement. The mystery itself proceeds at a slug’s pace with scares that underwhelm once they happen. I suspect that the original novel this film was based upon perhaps described such frights as the house bells ringing being more dramatic and scary. But as it’s presented in the film, it just appears more like the early invention of ding-dong-ditch.

So much of the dialogue is as dry and dusty of the era, often relying on meandering and meaningless voiceover that enhances nothing. Domnhall can be a great actor when thrown into scenes of great rage and horror, but here he is about as subdued and passive as every character bound and cramped within a stuffy picture. The whole experience is just so dull and dragging that by the time something mildly scary occurs, either in theme or genuine spookiness, it’s far too little far too late.

If The Little Stranger were a patient, it would be recommended a strong dose of adrenaline to, if not pick up the pace, wake this picture up. It’s a drowsy sort of costume drama that seems so preoccupied with duplicating the era it forgets about making the horror it intended to be. The costumes and settings may fit the period, but it’s appeal is greatly outdated.