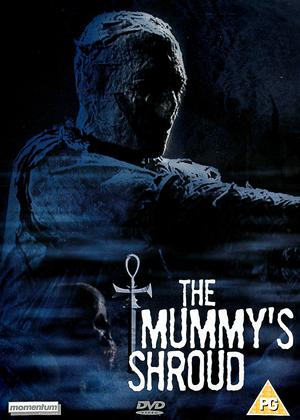 Reviews (1) of The Mummy's Shroud

"Beware The Beat Of The Cloth-Wrapped Feet!" was the advertising slogan for this film, so you can tell Hammer weren't taking it all that seriously. Which is probably why it's almost a spoof, right down to a crystal ball which works just like CCTV, and is suspiciously similar to the one Charles Hawtrey had in "Carry On Cleo".

Basing its plot fairly closely on the alleged curse of Tutankhamen, the shrivelled remains of the tragic boy-king Katu-Bey are not the mummy whose clothy footbeats we're supposed to beware of, which is a pity, because if that desiccated cadaver had bestirred its twiggy limbs and gone a-hunting, the results would have been infinitely creepier than the desultory rampage of the hulking Prem, who is often shown in the same shot as the other mummy, which is definitely not a man in a suit, and thus makes Prem appear even less convincing than his crude, immobile mask and peculiar romper-suit already do. Ironically, that last detail was based on how Egyptian royal mummies actually look, not the way they're supposed to look in mummy movies, so it's right but seems wrong.

The story is a hopeless muddle. After a lengthy prologue set 4,000 years ago, much of which shows us the action in the form of paintings to save money, and which tells us a great deal concerning an Ancient Egyptian dynastic struggle with no relevance whatsoever to the plot, we're treated to the usual clichés. A bunch of archaeologists bring the past to life more literally than they intended, which comes to pass thanks to an even madder mad Arab than usual (Roger Delgado, the best "Doctor Who" baddie ever), his absolutely screaming bonkers mother, whose performance makes his look restrained by comparison, and the sacred tea-towel of Osiris. The usual lumbering and slaying occurs. The only thing missing is a coincidental resemblance between the hero's girlfriend and the mummy's long-lost love.

Lacking the budget to hire a big name like Peter Cushing or Christopher Lee, the nominal star is André Morell, but they could obviously only afford him for a few days because his participation isn't much more than a cameo. Which leaves us with somebody or other as a hero who does almost nothing significant, a leading lady whose acting is so bad that her character is given completely irrelevant psychic powers in a failed attempt to make her interesting, and an anti-hero who ends up as the leading man by default, and is such an irredeemable bastard that even his on-screen wife knows she'll soon be a widow and isn't the slightest bit upset about it.

Yet it's one of those movies which you know is terrible but at the same time is hard to dislike. Several of the actors involved, especially the mother and son bad-guy team of Catherine Lacey and Roger Delgado, aren't taking it seriously for a second and revel in the glorious mess they've landed in, to the point when you wish the scenes with the murderous mummy were even more infrequent than they are so that we could see more of these people hamming it up as if they were in an overacting contest (perhaps unofficially they were).

And, thanks to the hero-shaped vacuum at the film's heart, the picture is stolen by, of all people, that incredibly prolific Hammer veteran Michael Ripper, who gets far more to do than usual as the splendidly-named Longbarrow, and seizes the opportunity with both hands. Longbarrow doesn't really have any relevance to the story, and ought by rights to be an irritating little twerp. But Ripper's excellent performance means he ends up being the only character you care about.