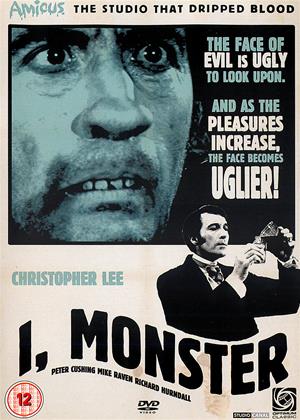 This is a film that revels in its very low budget: Doctor Marlowe’s (Christopher Lee) quarters are cramped, tatty and cluttered, the location filming is frequented by only a handful of extras and the effective soundtrack is performed by a tiny ensemble. These are not complaints – such things enhance the intimacy of what is one of the most faithful and entertaining filmic adaption of RL Stephenson’s ‘Strange Case of Dr Jekyll and Mr Hyde’ novella.

Two things marred any potential success this may have had upon release. To begin with, Stephen Week’s production was intended as a 3D release, but the process was abandoned mid-filming. This lends many scenes a curiously fluid movement which again enhances its uniqueness. Secondly, the central character of Jekyll/Hyde was renamed Marlowe/Blake – although all other supporting characters have names taken from the book. Probably this was due to Amicus’ concerns that audience confusion would otherwise arise between their film and Hammer’s upcoming ‘Dr Jekyll and Sister Hyde’.

And yet, there is a top-notch cast. Peter Cushing joins Lee as Utterson, Richard Hurndall as Lanyon, Susan Jameson as patient Diane and Mike Raven provides his best horror performance as Enfield. Yet it is Lee as the kind but starchy Dr Marlowe who steals the show. His descent into the initially mischievous Blake, with the death’s head grin and increasingly macabre sense of frivolity is terrific, despite the unconvincing hairpiece. He becomes frightened of the increasing power of his unsightly alter-ego in a tremendous scene in a leaf-strewn park. His earlier blurred-faced attack on a young girl in the street is surprisingly sinister. There is a finely balanced sense of sympathy/danger about Blake that is skilfully conveyed and carried through to the violent finale.