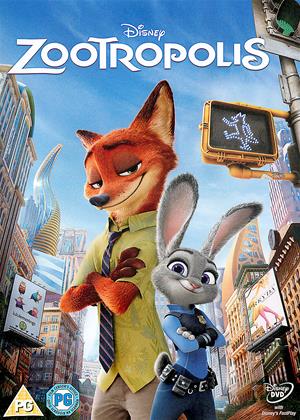 The first thing to say is that this film is laugh-out-loud funny at times - some clever gags and lines, and some strong characters, all help the well-designed plot move along at a good pave to a satisfying conclusion.

What works far less well is the constant worthy moralising - it's all about being a better person (or animal) and building self-esteem in the face of thinly-veiled analogies of racism and sexism. This movie clearly thinks it's being very clever indeed. But it isn't. That's where the movie become wince-inducing at times.

Of course this being diversity-worshipping 2016, the main character has to be female - just like another princess in Frozen winning against the odds. Happily, the character is strong and the fox sidekick a very strong and more interesting character to balance things.

But the mystery plot is interesting and strong, and most characters too - I loved the sloths!

The ubiquitous Idris Elba is madly miscast as a water buffalo police chief though - doing some weird US-mash-up of a cockney accent.

The world of the story makes sense if one suspends disbelief, and it has its own odd logic, as these fantasies always must. The 'night crawler' plot point is great fun.

So, a fun animation if you can get past the heavy-handed 'racism is BAD' worthy lecturing.

Ever since Disney acquired Pixar, and in particular the talents of John Lasseter, their animated movies have gone up several notches in quality, and this is the best work from the studio in a long time.

Everything you always had in a Pixar movie is there: the great plot, a wonderful array of colourful and engaging characters, some absolutely brilliant sight gags plus loads of laugh-out-loud moments and, most of all, that ability to appeal to both adults and kids in equal measure. In short, it is a lot of FUN.

As another reviewer has pointed out, though, where Disney still falls short is in banging you over the head with their holier-than-thou moralising. Pixar had the moralising too, sure, but they did it with ingenuity and subtlety; Disney insists on putting it full frontal, with no holds barred. The result here is that the film feels slightly heavy-handed beneath the fun; as an adult, it drags, and for the kids I bet it washes over them mostly unnoticed anyway.

Overall, definitely worth a look, especially if you want a genuine family film, but not quite the full five stars yet from old Walt!

Lots of visual and verbal jokes on the go here and it makes for a great film.

As others have said - very moralistic, but put that to one side and just laugh along with it all

The accompanying pop song of Zootopia is Shakira’s “Try Everything” and the lyrics couldn’t be more fitting. Here is an animated film that is willing to go further in every aspect of conceiving a city of anthropomorphic animals. A lesser movie would just make a few gags about species interacting with one another and call it a day. But Zootopia actually takes the time to fully define its own world with details big and small. How could a city of nearly every animal exist in the same climate? Separate the city into zones of different land types. How do you transport animals of various sizes across the city? Design a special train that is large and segmented enough to hold everything from hamsters to giraffes. These details may seem like overkill for a bit of animated family fun, but the dedication to world building helps sell Zootopia’s setting and story.

The society of anthropomorphic animals was apparently the result of an evolution where they all learned to overcome their base instincts. Prey and predator work alongside one another - a tiger mayor uses a wee sheep as a secretary rather than his lunch. But their still exists a barrier for certain species. In particular, the plucky rabbit Judy (Ginnifer Goodwin) is determined to become a police officer when not a single rabbit has ever been one before. She doesn’t let this fact get her down as she pushes her way through training among larger and tougher recruits to become an officer in Zootopia. Not favored by her water buffalo of a captain, she is reduced to the level of a meter maid for standing out as the tiniest of officers that includes rhinos and elephants.

She is given one chance to prove herself by solving the mysterious case of missing mammals. With no resources and no additional backup for the case, she’ll have to rely on her smarts to crack the case. This becomes an exceptionally difficult task when her only witness is Nick (Jason Bateman), a sly fox (literally) that specializes in being a professional con artist. He’s fast and crafty, but so is Judy when it comes to hidden recordings and uncovering tax evasion. She easily ropes in Nick to aid her investigation with plenty of detective work to be had sneaking into car lots and analyzing security tapes. What they uncover is a grand conspiracy of the animal kingdom that threatens to tear the society of Zootopia apart.

While kids will adore the quick wit and clever design of Zootopia, the heft of deep themes against a cunning mystery will perhaps entertain adults more. Not content with just being cute, the script carries plenty of messages to be deciphered about racism, sexism, stereotypes and xenophobia. Those are mighty big topics, but Zootopia thankfully takes the time to weave these traits into the story rather than bash the viewer over the head with them. Some of the themes become a little too relatable in how they echo the tensions of today, but they do not distract from the story. Much like Watership Down or The Secret of NIMH, a capable story is neatly layered over these messages so that there is still more entertainment than blunt allegory. Kids may not connect the dots of how Judy’s plight can be attributed to the glass ceiling, but they understand how she stands out from bulkier animals and must work harder to reach their level.

But is Zootopia still a fun and cute picture for the kids? It’s even better than that with its slick wit and smart comedy. Not a single gag feels tired or underdeveloped. Tiny rodents occupy a miniature town in Zootopia which makes Judy’s chasing of a criminal much more difficult, carefully stepping over the tiny populace and weaving around their buildings. A collective of Sloths assume duties at the department of motor vehicles where even the fastest of the bunch still takes forever to look up a license plate. There are even plenty of satirical gags that take shots at Disney’s other productions by referencing the absurdity of musicals and bootleg versions of other Disney movies. The humor has that special edge to it that I rarely see where in modern animated movies where it isn’t afraid to go a little higher over the heads of kids with its parodies of The Godfather and Chinatown.

Probably the greatest feat of Zootopia is how well it mixes all its ingredients together. A buddy-cop picture with a story reflective of politics and stereotype awareness could have gone south so easily. But the tight direction of Byron Howard and Rich Moore make this balancing act seem effortlessly ingenious. Even the inserted pop song by Shakira doesn’t feel all that out of place when the movie takes the predictable ending of all characters dancing. If an animated movie features that overused cliché and still has me engaged, it really is something special. It’s a fantastic picture that can be just as much hilarious and thrilling as it can be an important message for all children to carry with them. Not too many animated movies with dancing animals can make that claim.