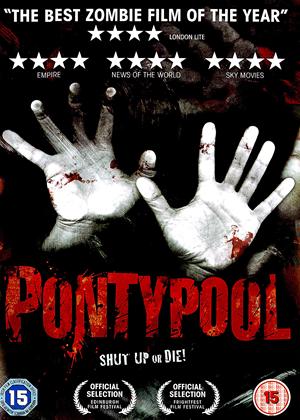 Synopsis:
What begins as another boring day of school bus cancellations quickly turns deadly when reports start piling in of people developing strange speech patterns and committing horrendous acts. But there's nothing coming in on the news wires. Is this really happening? Before long, Grant and the station staff, find themselves trapped as they discover the insane behaviour taking over the town is actually a deadly virus spread through language itself. Do they stay on air in hope of being rescued or are they providing the virus with its ultimate leap over the airwaves and beyond?
Actors:
Stephen McHattie, Lisa Houle, Georgina Reilly, Hrant Alianak, Daniel Fathers, Beatriz Yuste, Tony Burgess, Boyd Banks, Hannah Fleming, Rachel Burns, Laura Nordin, Louis Negin, Diane Gordon, Daniel Park, Yvonne Moore, Raffaele Carniato, Derek Scott
Directors:
Bruce McDonald
Voiced By:
Rick Roberts
Writers:
Tony Burgess
Studio:
Kaleidoscope Home Ent.
Genres:
Horror
Countries:
Canada

A vintage slight against radio personalities is that they have a ‘perfect face for audio’. Stephen McHattie, who plays outspoken Disc Jockey Grant Mazzy, has a great for ‘Pontypool’, a thoughtful Canadian horror. His every beleaguered expression add great weight to his performance here, as he is essentially the voice that informs us of a growing sense of unease around the town. His producer Sydney (Lisa Houle, McHattie’s real life wife) shakes her head in despair every time Mazzy says something deliberately provocative, and capable young Laurel-Ann (Georgina Reilley) holds things together with a quiet calm. All three central characters are instantly likeable, their professional relationship fascinating, especially the constant ‘creative disagreements’.

All this provides a solid background to the growing panic and horror that is spreading steadily throughout the outside world. A lot is asked of our three main characters. Their growing panic is all we have to communicate the evolving virus outside. It’s a long time before we leave the studio. We are as shut away as they are. I’m not sure I’m entirely convinced by the manner in which the disease is spread, but such reasoning does lead to some very memorable moments.

Deliberately going against the ‘show, don’t tell’ rule in this way won’t appeal to everyone, but I find it a very worthwhile – and above all, innovative – way of telling a story. The reverting to a pre-taped story (of a missing cat) takes on a more sinister turn because it means that the station is no longer broadcasting live. Writer Tony Burgess (who wrote the novel on which this is based) and director Bruce McDonald ensure that things never become dull.

The blizzards that cast an unforgiving white shadow over the ‘outside’ adds another layer of isolation and bleakness to this highly enjoyable production. Highly recommended.

I really liked this film - it is clearly low budget and most of it takes place in a radio studio. But it is also highly entertaining in the main - silly, yes. But for me, better than the Evil Dead or Zombieland. The only eakness really is in the last reel - as often in such films, there is a need to tie things up and give explanations, and the conclusion about why all the bad things were happening did not convince. However - it is based on a novel! Movies just interpret books - so the main creative force and the main person to blame for such things is the novelist and not the author of the adapted screenplay or the director: these just interpret the novel. Two thirds of moveis are based on novels, remember.