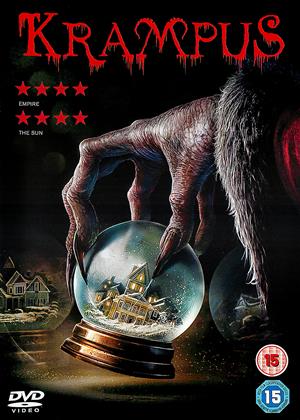 When I rented this title I thought KRAMPUS would be just another horror movie, with clichés, shocks, gore etc for the teenagers.

But oh no, this film has various dimensions thanks to the grandma character who is German, and a wonderful animated section in the middle of the film lifts this into intelligent territory.

Now, I know most teenagers won't have heard of KRAMPUS before but it's a Germanic tradition - and that ties in with the film throughout. If you want gore, rent out SAW or something - this movie is grown-up fun with some superb one liners that made me laugh out loud.

I thoroughly enjoyed this movie. The best Christmas film I have seen for years. Probably better for grown-ups though as hyperactive kids will want more trashy horror nonsense rather than intelligent films like this.

Xmas with a difference. A horror version of Santa Claus. Like Grinch meets Gremlins. Not sure if could show to kids under a certain age. Nightmares gtee

If you like how stupid and silly Chucky is, then watch this.

I have been looking forward to watching this film for months and months and when I received the disc I was over the moon! But.........that did not last long. This is one of the most pathetic horror movies I have ever seen. The characters acting is poor, the special effects are old fashioned and the monsters are plastic - they look like characters out of Labyrinth and Chucky.

I was really looking forward to this film coming out. Sadly I was disappointed with it, not scary in the slightest. It could of and should of been so much better than it is. It's a shame they didn't make this a nastier true horror film.

Krampus is the Christmas horror movie I’ve been waiting for - the one that will finally bridge elements of satirical jabs and bloody stabs. Finally, there is a sufficient picture to sit alongside Gremlins for the Christmas season, easily mixing both campy humor and genuine creeps. It feels too good have a movie with killer gingerbread men and murderous teddy bears that is actually competent enough to have fun with the genre.

Those familiar with the lore of Krampus know the game of this Germanic figure, rising on Christmas to take the bad children away. The Krampus has the perfect target this year as he descends on an American home of a very dysfunctional family trapped inside from the blizzard outside. Yes, we’ve seen this archetype before of everyone from the bitter parents, to the precocious children, to the teenage girl sneaking off with her secret boyfriend. The beauty of this scenario is that there is no heartwarming Christmas spirit to bring them all together. In its place are demonic forces that will rip them apart. These include murderous gingerbread men, bloodthirsty teddy bears and a jack in the box that will eat you whole.

With the presence of such monsters, it begs the question if this is more comedy than horror. The manner in which these critters slowly pick off the family is treated with severity, but also a dark charm. Such means of capturing the family include fishing down the chimney with a Christmas cookie for the fat kid to take the bait. When out in the snow, monsters start sucking down family members as if they were sharks of the mounting white. And, yes, the depiction of some of these evil doers are a little more comical than they are terrifying. But when the mysterious Krampus is finally revealed, it’s an undeniably terrifying creature of beard, teeth and claws. His character and his portal into hell evokes a certain terror even if it is additionally played for tongue-in-cheek comedy.

The cast at play is likable enough in that we actually care about these characters, either through genuine sympathy or dark laughs. The young boy Max who desperately wishes for a merry Christmas is likable enough that I actually wanted his wish to come true. His father Tom (Adam Scott) also comes off as a fatherly figure with a few flaws, but a protective nature when evil spirits start attacking the house. And then there are the filthy mouths of David Koechner and Conchata Ferrell providing both a family conflict and the comic relief. The scene where Koechner takes on the evil gingerbread men with a shotgun is the perfect use of Koechner, taking a beating and throwing out hilarious lines. Even Conchata gets in some beautifully sarcastic remarks, especially when the whole house goes to hell with invading monsters.

Krampus just has a giddy sense of horror that perhaps is more enjoyable on a comedic angle, but still a capable and crafty picture. My only real qualm is how focused director Michael Dougherty seems to be with maintaining this balanced atmosphere that the picture rarely seems to bite down hard on either the horror or comedy. But Dougherty’s toying and winking with convention still makes Krampus an entertaining Christmas horror movie. Considering we don’t have many movies of this particular niche genre, Krampus succeeds where so many fail.