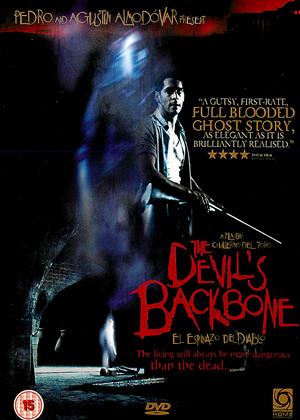 Reviews (4) of The Devil's Backbone

If you though there was a bit too much CGI in “Pan’s Labyrinth” and the estimable “Hellboy” series, this film shows that even before people started throwing money at him, del Toro was a brilliant director who knew how to tease an audience and get the best out of young actors. With barely any of the jump-scares or gore so beloved of modern directors, he builds an atmosphere of dread and foreboding, relying on old-fashioned spookiness rather than the more visceral stuff we’ve come to expect. But it’s not just a satisfyingly scary ghost story- there are love triangles, new-kid-in-school ordeals and it’s all played out against the turbulent backdrop of the Spanish Civil War. Just brilliant.

I liked this film. As always with Spanish/Mexican movies, it was gruesome sith blood dripping off everything; and as usual in films from catholic countries, children feature heavily - representing innocence. Also, so many movies in Spanish are obsessed with the Spanish Civil War - perhaps because the ghosts of that are still haunting everyone. It is a bit like the Turn of the Screw, Spanish-style. Sinister, moral, interesting to watch - and some moments of real tension. Better than Harry Potter. Recommended.

'The Devil's Backbone' is in Spanish, with subtitles. Please don't let that put you off - it's a superb, atmospheric film, beautifully photographed, rich in symbolism and directed by the Mexican director Guillermo del Toro, best known for his film 'Pan's Labyrinth'. I count it as probably the best film I have seen this year and only wish I had seen it sooner.

Like 'Pan's Labyrinth' it is set in the 1930s against the background of the Spanish civil war. While that film showed a child using fantasy to shield herself from the horrors of war, here the film is ostensibly a ghost story and the prospect of death is more immediate.

The film starts with a boy bleeding profusely from a head wound and immediately afterwards a bomb falls into a courtyard, embedding itself into the ground - but not exploding. This opening sequence is followed by the main story as a boy (Carlos) is brought to an orphanage by his tutor / guardian and the owners (Dr Casares and Carmen) persuaded to take him in. It is revealed that the orphanage is for the children of Republicans (the democratically elected left-wing government side, usually regarded as the goodies) who are fighting a civil war against the Nationalists (supporters of a military coup, supported by Nazi Germany and Italy, and usually regarded as fascists and baddies). Carmen has gold bars in a safe that are used to fund the Republican side. And Dr Casares has specimen foetuses in his laboratory, one of them with spina bifida - the 'devil's backbone' of the title.

As Carlos settles in to his new life amid bullying by one of the other boys (Jaime) he discovers that the orphanage is haunted - he sees a ghost who warns him that many will soon die. The school caretaker (Jacinto) treats him cruelly - he is an unpleasant person, a long-time resident of the orphanage himself, who is after the gold in the safe. Jaime turns out to have witnessed the death of Santi, the ghost, at the hands of Jacinto. Events turn from bad to worse as Jacinto blows up the orphanage, steals the gold - only to have the boys + ghost take their revenge on him.

From the opening sequence the viewer is enveloped in a dark atmosphere of symbolism and foreboding. The film is not a ghost story, not a thriller, not a horror film but an allegory about childhood in wartime. I'll leave you to work out the symbolism of the 'devil's backbone', the unexploded bomb and the fact that Carmen has only one leg...

Horror? What horror? - The Devil's Backbone review by SM

This is a gripping film and a dark tale but I wouldn't call it a horror film; more of a thriller. The title 'horror' might put some people off and it's a film that deserves watching.