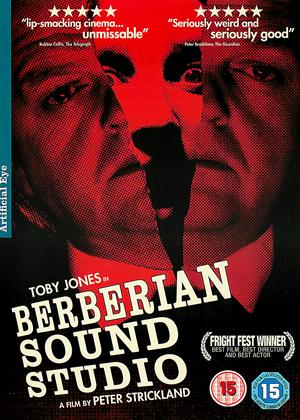 Much weirder than I expected - Berberian Sound Studio review by BS

Where do you start? Slightly surreal at the start, including some lovely Italian touches, but never leaving the dank studio. The characters are beautifully realised, and the style is wonderfully understated, with moody use of sixties and seventies soundscapes that fit perfectly with the story.

It does however get pretty weird by the end. The whole magpie thing is freaky - almost up to horror film levels.

If you can take odd and slightly creepy leftfield films, it'll hit the spot. It worked for me, but I liked Valhalla Rising and Holy Motors...

Sound effects technician Gilderoy travels to Italy to work on what appears to be a horror film. Revered producer Giancarlo Santini (Antonio Mancino) waves a dismissive hand at the term: “It isn’t a horror film, it is a Santini film.” Although the credit titles to this unspecified film actually form what appear to be the titles to ‘Berberian Sound Studio’, we never really know how the lurid sound effects are used.

There are plenty of close-ups on ravaged vegetables, cut, splattered and sliced to emulate brutal sounds. Toby Jones’ sensitive and insular Gilderoy is subject to increasing rudeness as the film progresses, from just about everyone around him. He speaks softly. He writes and received affectionate letters to his mother back home.

Silvia (the terrific Fatma Mohamed) warns Gilderoy about Santini, who has apparently molested her. His missives to his mother become less affectionate, the body of the text concentrating on local mishaps and animal killings rather than loving pleasantries. Strangest of all, relentlessly seeking a ticket refund for his flight to Italy from disinterested staff, Gilderoy is told that the flight never really existed.

Music (and some of the sonic effects, I imagine) is by Birmingham band Broadcast, who have added the soundtrack to this stylised film to their growing discography. Vocalist Trish Keenan sadly died suddenly whilst working on the album.

Towards the end, the film seems to wilfully impenetrable, projecting weirdness for the sake of it - possibly echoing Gilderoy’s addled mind, who knows? And to be honest, who cares? ‘Berberian Sound Studio’ starts off in an unorthodox way, which is promising, and seems to be going in an assured direction – but just ends up getting more strange, promising to deliver something, but never actually doing so. Only the relentless bullying of Jones’ well-played character makes any real impact, because he is (mostly) so impassive and the perpetrators of such ill-manners are so complacent in their behaviour. Other than that, as Gilderoy becomes more integrated in what is going on around him, we lose any connection with him. And then the film ends, leaving the audience wondering what they have just watched, despite the obvious talent on display.