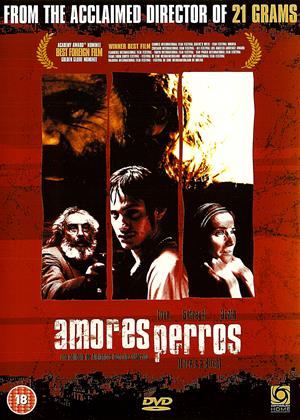 Amores Peros is an excellent portrayal of losing whats important and how we and those around us get caught up in and become the unconsciouse archietitchs of such chaos. By Looking at three superfically unrealted stories we begin to see what all three have in common.

But the brillance of the film is in the way it is written which at times fells like there is no narrative at all and that you are as ignorant as the characters you are watching. The outlook of the writer is also uncompromizingly bleak with his focus seemingly resting on the lose of idealisim in the face of the uglyness of the world. As such it is a film without hope.

The only critic of the film would be its use of gross mortal animal violence for no other reason than to achieve certain "real" shots. It goes without saying therefore that a lot of dogs where brazinly murdered for the production of this film.

But despite this whats done is done and unneccassary barbarizim to one side this is an excellent film and shouldn't be missed.

This multi award-winning movie from Mexico is almost 2 1/2 hours long, but not too long, since 3 stories are intertwined around an accident. We follow the lead up, the consequences and a bystander getting involved. Fascinating and unusual. Actor Gael Garcia, the director of photography and the composer have all later made a career in Hollywood - partly due to this poignant movie with dogfights and violence, love and hate. Recommendable!

Not my cup of tea - Amores Perros review by CP Customer

Although has similarities with city of god in its film making style. I found the story unengaging with brief highlight of interest. Did not enjoy the experiance but thats just me.

This film starts slowly and the viewer needs patience at the start - but then, after a while, it turns into a really quite excellent movie - three disticnt stories, all connecting, is a bit like Short Cuts - but the theme of love and dogs (amores perros) develop beautifully. Best of all is the old tramp's story, but the young thugs' story and the yuppie couple's story, also work well - and are really quite damning about south American society, with its massive divisions. Highloy recommended to anyone who likes foreign films; also anyone who's a dog lover will like it - I'm not really, but still really loved it.

Fighting dogs feature heavily in this brutal and violent Mexican film. I did not find it palatable. Several scenes of dogs killing one another and then of men killing dogs is disgustingly gory. The other scenes are no more pleasant. Only for extreme violence seeking viewers.