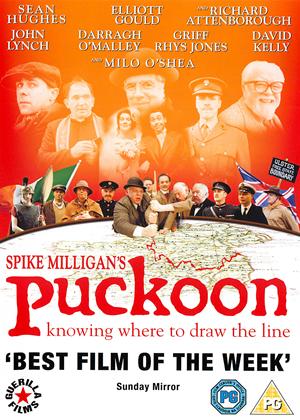 Synopsis:
It's 1924 and the Boundary Commission from Britain and Ireland is deciding on the new boundary line between Northern Ireland and the Irish Republic. After months of haggling over every inch of territory, the commissioners are forced to finish the job in hand, after a bicycle incident destroys the surveyors equipment.
With all the participants holding down the pencil and much pushing and shoving, the border finds it's way down the middle of Puckoon, dividing house from outhouse, man from wife, pub chairs from bars, church from cemetery. Our hero Dan Maddigan (Sean Hughes) wakes up from his indolence to find cheap beer on the wrong side of the pub, and on a border patrol demanding passports. 'Puckoon' will never be the same again. Something has to be done...
Based on Spike Milligan's best selling legendary comic masterpiece, 'Puckoon' is a politically true(ish), politically incorrect and some believe profoundly funny tale of a divided island and Ireland.
Actors:
Sean Hughes, Elliott Gould, Daragh O'Malley, John Lynch, Griff Rhys Jones, Nickolas Grace, B.J. Hogg, David Kelly, Milo O'Shea, Freddie Jones, Richard Rickings, Richard Attenborough, Marc Sinden, Frankie McCafferty, Conor Mullen, Margaret D'Arcy, Richard Dormer, Maureen Dow, Ronnie Drew, Enda Fields
Directors:
Terence Ryan
Producers:
Terence Ryan, Ken Tuohy
Writers:
Spike Milligan, Terence Ryan
Studio:
Guerilla Films
Genres:
Comedy

Spike Milligan's anarchic, freewheeling prose has never been satisfactorily adapted for the big screen, and this most recent (and probably last ever) attempt fails worse than most. The problem isn't that the cast and crew weren't giving it their best shot. Clearly it was a labor of love, with a great deal of talent being fruitlessly thrown at an unfilmable book in the hope some of it would stick, and that's why it deserves more than one star. But the best you can honestly say about it is that, as movies based on the work of Spike Milligan go, it isn't the worst - that would be "The Great McGonagall", the "Plan 9 From Outer Space" of historical dramas (which is actually more entertaining than this, though for all the wrong reasons).

On the downside, it simply isn't funny. And for the film of a novel whose sole purpose was to make people laugh as much as possible, that's a serious problem. The trouble is that the descriptions of the events in the book are much, much funnier than the events themselves, and although the film tries to squeeze in as much of Spike's undiluted prose as possible by way of narration, mostly we're left with one-dimensional caricatures overacting desperately in an attempt to make feeble slapstick seem hilarious. What might have worked as half an hour of non-stop zaniness in the spirit of "The Goon Show" is stretched to an hour and a quarter, which, though still very short for a modern feature film, is at least twice as long as the material is good for. And the quaint "ould oirishness" of it all hasn't aged well - "Father Ted" dealt with similar themes infinitely better.

I remember that when this film was released in 2002, it got pretty good reviews, yet opened throughout the UK in a grand total of 3 cinemas before sinking without trace. In hindsight, the critics obviously couldn't bring themselves to be honest because Spike died almost simultaneously with the release of the movie, which is dedicated to his memory (though it seems the distributors took a more pragmatic view). Well, that was 13 years ago, the period of mourning is over, and we can tell the truth now, This is tedious, misconceived rubbish whose one saving grace is that its heart's in the right place. Unless you're a Milligan completist, rent "Father Ted" instead.