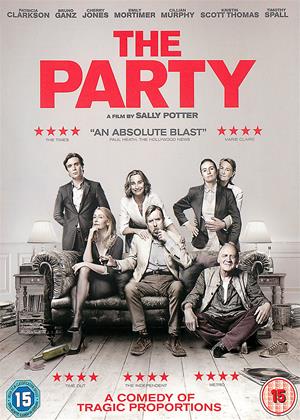 This unusual, off-the-edge film is really, really good. For once in her life Kristen Scott-Thomas actually acts, instead of just relying on looking enigmatic, and golly, can she act! Timothy Spall turns in his usual reliable performance, and all the other actors give good performances - with the exception of Emily Mortimer, who seems to think looking pained is acting (did you see the TV film about the children sent to Australia? I rest my case).

The plot is exceptional, and although I felt afterwards I should have worked out the denouement from the opening scene, I didn't see it coming at all and it was brilliant. The black and white photography and dark humour rounded off an excellent film.

Batman and James Bond it ain't, and thank goodness!

Along the lines of Abigail's Party, this brings the theme up to date, and not much time is wasted with niceties as each character lays bare their insults and weaknesses. The characters are extreme, and the dialogue and action is fast paced.

The unusual and wide choice of music that Timothy Spall plays throughout most of the film on his record player is wonderful and adds a lot to the edgy nature of the film. Great acting from all characters make it a film very worthwhile watching.

The extra feature on the disc shows "the making of" and is in colour, showing the set in its full splendour, and I can't help feeling the picture would be even better in colour than black and white.

This film has a top notch cast - though one suspects that several Americans have been added to give it appeal in the US. Ditto for the pc gay baby subplot.

It is really a play for theatre, and would work much better there. No good reason for it to be in black and white, other than artistic pretention (which the director Sally Potter is known for maybe). NO surprise at all that it's state-subsidised by the BBC and lottery-funding.

I just didn't believe the plot, frankly (no spoilers) and some of the dialogue was text book stagey - though thankfully the whole this is mercifully short at just over an hour. But boy, is it smug! These people live in a £3 million London house, isolated from the problems many out there in the real world face, yet are so self-absorbed I couldn't have cared less if bad things had happened to any one of them.

So I would have given it 2 stars or 2 and a half. BUT this gets 1 star for the following reason: it depicts DISGUSTING domestic violence against a man - by a woman. Now, imagine if that had been the other way round eh? That would never have been deemed pc or able to be shown on screen. But as per usual, it is just fine to show domestic against men - which comprises 40%+ of domestic violence actually, though our media show women as perpetual victims and men as perpetual abusers - a lie, basically, but one maintained by feminists.

So no stars at all.

Silly stagey drama about tedious self-centred middle class people. Contrived and not even funny if you recognise the types on display. Has nothing to say and says it badly.

Not up to Sally Potter's usual high standard

Masterful - The Party review by BM

An absolute gem of a film - taut narrative and well drawn characters played by excellent actors at the top of their game. Short and clever with a superb twist at the end - don't miss this one if you are into quality thinking peoples' films!!

fantastic and edgy - The Party review by OP

Fabulous edgy drama (the black and white really works) which had me gripped from the beginning. Really excellent dark humour and incredible character portrayal. Highly recommended

A simple to understand film, well presented with sound acting, not overlong, that is laugh out loud funny, well worth a watch.

Interesting movie, filmed in black and white with an excellent cast and interesting set ( not a real house, but a creation in the studio ).

I love Kristen Scott Thomas who is my favourite actress and she is wonderful in this role.

Unfortunately the script is not up to Pinter standard , hence only 3 stars.

A dig in the ribs! - The Party review by HM

Well, the people in this 'play on film' are not attractive but definitely magnetic. A rollercoaster of a ride through people's pretensions and tortured love lives as they meet for a party in an expensive but cramped end terrace house in our capitol city. Are there people like this? I expect so and it that case it is an education.

An intelligent film, it won't appeal to those seeking a movie that serves up entertainment without having to meet it with a little thought and pay attention; you may miss signals about who lurks behind each mask.

A cruel satire on London elite manners and angst, but I couldn't take my eyes off it, despite not being like that myself... err I hope. Maybe it touches a few truths about you the viewer as well. A bad thought.

Provocative and funny too. More than a few twists and turns, which may take you by surprise.

So boring, and waste of time we never finished watching it. Tim just looks vacant all the time, the cameras keep wobbling as well, so looks like a school play rather than top actors doing the biz.