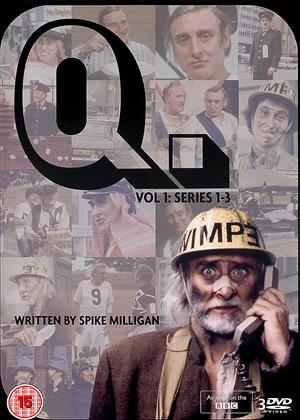 Sign up
Doctor Who: The Dalek Invasion of Earth

The first thing that struck me about this compilation, before I even got as far as the episodes, was that, although all this material was made and originally broadcast by the BBC, these discs were released by a company that has nothing whatsoever to do with the Beeb. Presumably that's because Spike's relationship with the BBC eventually got so strained that they sacked and basically disowned him, to the point where they had trouble finding enough material they were happy about airing to fill the tribute evening they broadcast when he died. The reasons for this aren't as apparent here as they will be in Volume 2, but if you're likely to be offended by white actors in blackface, cash registers being referred to as "Jewish pianos", or Pakistani Daleks, you probably shouldn't rent this!

The second thing that struck me was how extraordinarily self-indulgent it all was. Re-watching Monty Python recently after a long time, I was surprised how many sketches I'd completely forgotten because they weren't very funny. With Spike's shows, there's a much smaller ratio of inspired lunacy such as the Irish astronaut who thinks the lift at Harrods will take him to the Moon, or those extremely politically incorrect but very funny Pakistani Daleks, to sketches which seem almost completely random, and consist to a great extent of Spike staring at the camera in his trademark "I'm mad!" way while saying not very funny things in his default "This is funny!" voice. And some of the supporting cast, not to mention nearly all the guest musicians, are obviously on the show because they're friends of Spike, and there's a very good reason why you won't see them anywhere else.

When it's good, it's hilarious. But far too often I found myself thinking that if I was laughing as much as the cast were at their own jokes, I'd be having a lot more fun than I was. Even the good bits are sometimes less funny than they should be. Everybody chuckles fondly at the mention of Jehovah's Burglars, but that great idea about people whose religion compels them to rob you is almost immediately abandoned, and the sketch becomes incoherent, as far too many of them do. I think these shows may have seemed funnier at the time because if your only way to see them was on TV for half an hour once a week, you'd forgotten about the weaker gags by the time it came on again, and it wasn't so obvious how repetitive some of the jokes were. But viewing it in large doses, I was disappointed to find that it hadn't aged as well as the best Goon Shows, despite being considerably more recent. Spike seems to be relying on the fact that he's officially the funniest man alive, so the audience are primed to expect everything he says or does to be funny. I suspect that if he'd somehow ended up with a studio audience who didn't have the slightest idea who he was, the silence would sometimes have been deafening.