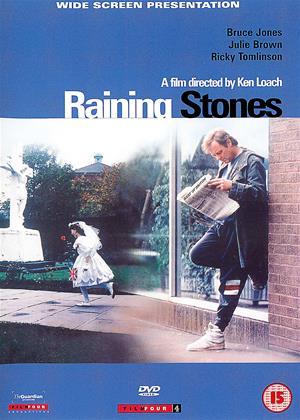 Set on a council estate in Langley, Middleton, an overspill housing area for Manchester, the film tells the story of the life and hard times of Bob, who wants his daughter to have a (costly) new dress for her first communion. Out of work, he resorts first to dodgy deals and then in desperation to borrowing the money, which results in a loan shark and local hard man terrorising his family; Bob then takes his revenge.

Told with humour as Bob (played by Bruce Jones) and his mate Tommy (played by Ricky Tomlinson) bumble around trying to raise money through assorted ill thought out schemes. The film is typical of Ken Loach's work, with the message that the British working class are hard done by and driven to desperate deeds by the system. The film is gritty and realistic but with considerable warmth, the characters are believable, and Bob is portrayed as a fundamentally decent man, the victim of unavoidable circumstances. 4/5 stars. Highly recommended.

In "Raining Stones", Loach picks up some of his familiar themes - in particular, the ways that small pieces of poor fortune can spiral into serious, sometimes life-threatening, situations for those who are already vulnerable. Bob (Bruce Jones) and Tommy (Ricky Tomlinson) are friends, neighbours, and collaborators in various schemes to raise a bit of money, but things seldom work out as they hope. Bob's daughter is about to make her first communion, and he wants the very best for her, which means an expensive new outfit for the big day. His pride is one of his great strengths - but it is also the root of his problems.

The dialogue is also classic Loach, apparently ad-lib and conversational rather than slick and scripted, which adds to the humanity of the characters and the realism of the film. Perhaps less typical of Loach is his portrayal of the church's role in the community in this film, in the person of Fr Barry (Tom Hickey), who is known by his people, and who knows them - the good and the bad - and loves them.