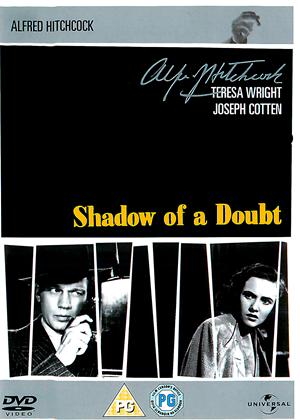 Cinemadiso's 1940s in Films Vol 2.
15 films by cinemadiso
Christopher Chiu-Tabet's Films I used to own
29 films by christopher-chiu-tabet
Frankie's 1001 Movies You Must See Before You Die
982 films by frankie
rob's Rented
1052 films by rob-1

Reviews (3) of Shadow of a Doubt

A Classic . . . Without a Doubt - Shadow of a Doubt review by CP Customer

Charlie is bored. Nothing much happens in her small town. Then Uncle Charlie arrives. Suddenly life isn’t so bad. But someone should have cautioned her to ‘be careful what you wish for’. Niece and uncle, heroine and villain, are linked by name and blood. And thus are their mutual fates entwined.

Hitchcock's finest - Shadow of a Doubt review by JD

Hitchcock's daughter says in the bonus feature that this was his favourite film. It is one of his first in America. I don't think it is better than his more famous films (Psycho, Birds and Rear window) and I was not taken with the sudden switch from adoration to rejection of a niece for her uncle. Not well done and not elegent. An avarage 1943 B&W film.

American Gothic. - Shadow of a Doubt review by Steve Mason

By 1943, Hitchcock's American films were objects of beauty. The editing had a poetic beat, the camera work was liberated and penetrating, the perspectives were striking and persuasive but unpretentious.

Shadow of a Doubt is American gothic, based on a real life serial killer and co-written by Thornton Wilder, the laureate of Americana. It is one of those films where we see some terrible threat visiting an idealised, artless American town.  This small town innocence is epitomised by the comic relief of Hume Cronyn and Henry Travers'  double act as a pair of bickering true crime enthusiasts.

Joseph Cotten is the Merry Widow killer, who calls on the family of his sister, particularly his teenage niece Theresa Wright, and brings the horror of the world with him.

And yet, it lacks suspense, I think because Hitch is a little shy of detailing the darkness of the terror that has come to stay. The nearest he gets is a superb scene when Cotten seeks to dispossess Wright of her naivety with a bitter, cruel monologue. They are in a bar and the pair are served by a waitress who was a classmate of the girl but already is trapped in a life of penury, emphasising the sheltered privilege of the few and the long struggle of the many, of which Wright is ignorant.  This is the only really moving moment in the film. Most of its appeal is to be found in its technical brilliance.