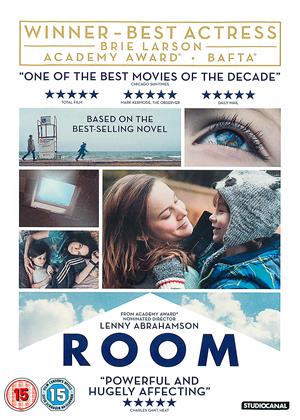 Shallow and rather voyeuristic indie from the point of view of a kidnapped mother and son is probably a sincere recreation, but has little to say, and fails to follow though on its ideas. Well acted by Brie Larson, who deserved a better script.

Excellent - Room review by BE

Brie Larsen deservedly won best actress academy award for this movie. Her co-star, Jacob Tremblay, is also hugely impressive. No intrusive background music and non mawkish, this Candian/Irish production is well worth viewing. It's based on a work of fiction but there have been like scenarios in real life. The author of the book apparently based this story on a real life incident.

In some hands this could have become a run of the mill thriller but instead it is something far better. An intriguing premise that slowly unravels into something that leaves you gasping for air and trying to hold back the tears.

Excellent performances and direction (although Macy feels wasted) from all involved. It does leave a lot of questions unanswered but take it for what it is, a story about a mother and her son and trying to find their place in the world and that this entails.

I'm sorry some other reviewers haven't enjoyed it, but can only conclude that they haven't understood what it's trying to say. You have to be able to imagine your self as each of the characters and consider what (conflicting) emotions they would be experiencing. The plot may not seem so contrived given that there have been several real-life cases similar to that shown in the film

The ultimate film of two halves - Room review by MD

This film has received almost universal praise, and let me say straight away that several things about it, notably the performances of Brie Larson and Jacob Tremblay, are worthy of that praise. However, taken as a whole, I think the film is decidedly mixed, with a contrived and manipulative plot, a script that veers far too often into unbelievability and unwarranted melodrama, and a rather-too-neat and simplistic finale all being key weaknesses that offset the good points.

Essentially, it is a film of two halves, the first excellent, the second poor (and increasingly annoying!). The set up in the first half is quite believable, and despite the 'difficult' subject matter, very watchable and engrossing. This all changes with the ridiculous nature of the boy's escape.

Thereafter, it seemed a wholly different film. The set up now was the opposite, very unbelievable. There were all manner of plot contrivances and character changes in behaviour that seemed merely the whim of the author/scriptwriter, with a TV interview scene that even for American television seemed completely OTT. Despite the feel good ending, for much of the second half I felt the film was suggesting that the world outside Room was worse than Room itself, which just made no sense to me.

I sat down to watch this in a very positive frame of mind because from all I had heard I genuinely thought it was going to be a pretty special film. I came away feeling I had been conned; the ingredients were there in the first half for a truly great film, but the direction it then took was at best disappointing, at worst simply dead wrong.

I hated this - I mean I REALLY hated this. So much so I turned off half way through and it is so rare for me not to finish a film!

This is just salacious, manipulative and, frankly, dull - based on a massively over-rated novel which just wrote up a tragic true case.

Of course, the Oscars are always awarded to actors playing disabled or abused characters. And the Americans adore a pity party.

But this film is tripe.

An original story which unfolds with many surprises. - Room review by AS

A thought provoking story which allows the viewer to feel what it's like to be each character -- the pace is slow enough for some real depth to be experienced.

It is so disappointing when a film does not load. Everything worked fine with the other film I was sent that week, but Room would not play - why, why not? Definitely not my equipment. Oh dear...

Loved this film! Such an unusual storyline, but the written dialogue and excellent acting made it very real and believeable. Recommended!

Read the book years ago, and was surprised that a large part of it was left out in this adaptation. Nevertheless the film flowed well and apart from the kid being a bit more of a brat than I remember, all the parts were played well and it captured the essence of the book on a smaller scale. Well worth watching.

Room is the type of drama that likes to throw the heart of a parent through a meat shredder with tearful fears about parenthood. Every parent wants to protect their children, shield them from danger, be a teacher and has the ultimate fright of not being fit for the title. It’s a major credit to Brie Larson playing the mother terrified of the world and Jacob Tremblay perfectly portraying the curious kid with big dreams and tender thoughts. It’s rare that I find myself getting misty-eyed at the movies but the genuine frustration and compassion of this family in a tough situation really pushed those parental buttons and made Room one of the best films of 2015.

Larson plays a woman known only as Ma to the five-year-old Jack (Tremblay). The two of them have lived since Jack’s birth in a shed, hidden away from society by Ma’s raper/kidnapper, known to Jack as Old Nick. Growing up in such a small space, Jack has a different view of the world within four walls. He has problems believing things are real when reading about them or watching them on TV. He treats his sink, chairs, and tables like stuffed animals, giving them pet names and greeting them every morning. Jack sleeps inside a closet when Old Nick stops by ever so often to rape his mother and supply them with food and gifts.

It’s both fun and tragic to watch Jack explain, decipher, and lash out at his small world. He has a vivid imagination as well as a short temper common in kids. His mother tantalizes him with making a real birthday cake but there are no candles. The lack of candles leads to an outburst. He grows angry and sad but recovers much faster than Ma who goes through bouts of depression about how her life has ended up. Her scheme to escape the room inspires her to finally tell Jack the truth. But it’s a truth he’s not quite ready for, refusing to accept her stories of the outside world he doesn’t believe to be real.

What makes Room shine so well is that it focuses almost exclusively on the relationship between Jack and Ma. Sure, there’s a courtroom case, a media circus, and a questioning of how well Jack’s body will adapt to the outside world, but they never overshadow the terror and tears of a mother and son trying to connect. Once Jack and Ma escape the room, things are still rough. Grandma and grandpa are not how Ma remembers them, Ma slips into a deeper depression, and the bigness of everything is frightening for the boy. It’s a massive change that makes Jack almost nostalgic for the simpler days of the room.

The performances are first rate all around. The innocence in Jack is both amusing and sad for his comprehension of the world, stating he knew little inside the room and knows everything now that he’s out. While his contemplation on how the busy modern world functions seem profoundly deep, they’re delivered with a certain childhood sweetness that never feels forced. At the same time, Ma has that same look of despair that’s been etched onto the faces of a million parents, feeling powerless to be a provider and that forlorn descent into the bed covers, refusing to face the world and be the adult. It’s an all-too-real behavior that aimed to bleed every spec of water from my eyes, showcasing a real, tender, and heartbreaking bond of mother and child.

There was never a moment I wasn’t enraptured with the sweetness of Room that earns its warm sensations and mournful arguments amid a dark past. I felt an overwhelming amount of sympathy for its characters which feel true and complicated, struggling to do the right thing. Such simplistic statements as Jack assuring his Ma that she doesn’t have to be a great mother, just Ma, hit deeper than I thought for the emotional performances and journey. The journey from room to world is not easy for Jack and his eventual happiness comes on a rocky road worth the trip. The final scene where Jack bids a bittersweet farewell to the inanimate objects he once thought of as friends is exceptionally tough to watch. I’ve never been so moved by a child performance. This is a first-rate drama.