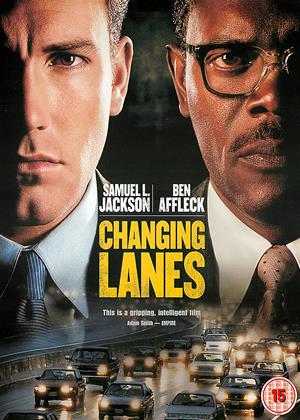 Sign up
Master and Commander: The Far Side of The World

A clever thriller with a moral tale. - Changing Lanes review by CP Customer

I have to admit I was expecting something along the lines of an action drama, but to give 'Changing Lanes' its full credit, it's quite an original thriller about ultimately doing the right thing. The plot revolves around two men from radically different backgrounds who due to both of their faults are involved in a minor car accident. Gavin Banek, (Ben Affleck), a is a high flying lawyer who is rushing to get to court with an important document, and to get back on his way simply offers a blank check to Doyle Gipson (Samuel Jackson) for any damage caused. On the other hand, Gipson wants to do things the right way and exchange details and refuses the check. Banek, knowing he is up against the clock rushes off and leaves Gipson stranded at the side of the road. The trouble is, while Banek was so preoccupied in getting on his way he didn't notice the document had fallen out of his briefcase and was picked up by Gipson. Ironically, Gipson was also going to the same courthouse and had Banek given him a ride, fate would have turned out differently, but instead both men become locked in a high stakes game of revenge. That plotline alone is enough for a decent movie, but what sets 'Changing Lanes' apart is an intelligent moral subtext. What could have been just another urban action film becomes not only an exciting thriller, but a clever commentary on today's moral values, and shows in a world where we rarely put the needs of others first, doing the right thing can be far more revolutionary than doing the wrong. Ben Affleck is great as Banek, the Wall Street attorney desperately trying to recover a lost file; and shows when he chooses the right roles he's a decent actor. Samuel Jackson, as Gipson, convincingly portrays an estranged, alcoholic father struggling to salvage what's left of his life, and Roger Michell's direction perfectly captures the feeling of a frantic struggle through the oppressive streets of New York. Overall, 'Changing Lanes' is an entertaining, engaging and thought provoking film that is well worth renting.

Samuel L Jackson's character is utterly mesmerising as a reformed alcoholic trying desperately to claw his life together. It is a totally outstanding performance, I could totally understand his situation, even though as a very angry back American his is so far from my experience. Affleck is a good contrast to this, as an utterly contemptible lawyer so totally corrupt that it will be a while before I can forgive lawyers again.

A minor traffic accident on FDR Drive entangles two lives: recovering alcoholic Doyle Gipson (played by Samuel L. Jackson) and rich young lawyer Gavin Banek (played by Ben Affleck). They antagonise each other and end up with deeply entrenched positions from which neither will easily budge.

Lawyer loses an important file, and in order to force its return ruins Gipson's finances. In revenge, Gipson taunts Banek with snippets from the file and causes an accident to his car. Banek eventually comes to realise that he is enmeshed in a fraudulent legal case and resolves to do something about it. Gipson returns the file and Banek uses it as a weapon against the corrupt partners in the law firm and also helps Gipson reunite his family.

Clear as mud? While the story itself is unrealistic, the film makes it pretty clear that the choices made by the characters are moral ones, wrapped up in a thought-provoking drama.

The central characters are very well played and I like it. 4/5 stars.